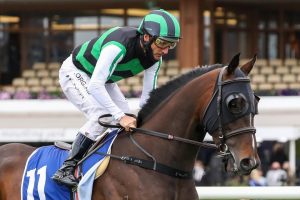 A ban in his home state won’t stop Flying Award from making his debut for a new yard at Morphettville this Saturday as one-time Caulfield Guineas favourite looks to recapture his best.

The Listed winner has been forced to head to Morphettville for his return run as his owner is banned from having runner in his home state.

Racing Victoria have refused owner Sean Buckley the right to nominate horses in the state as it completes an investigation into a surrogacy program at Ultra Racing.

Buckley plans to fight the ban in court but in the meantime the Corstens will have to travel the three-year-old across the border to run him.

Flying Award has been off the scene since finishing 11th in the Coolmore Stud Stakes at Flemington last year when trained by Danny O’Brien.

The Shamus Award gelding, which was favourite for the Guineas heading into last spring, was forced to undergo a throat operation after his Coolmore run.

He has since made the switch to the Corstens yard, who are hopeful Flying Award has put the issue behind him.

“Damian Oliver rode him in his last trial and said he is not making the same noise pulling up as he did previously,” Troy Corstens said.

“It’s always hard to tell with these things until you get them to the races but he appears to be well.”

Flying Award was an equal $4.20 TAB fixed odds favourite with Echoes In Eternity to win in his first start in seven months.

Corstens expects his new addition to run well in his return despite not showing much at home.

“He is typical of the stallion and doesn't show a lot in trackwork or his trials. They are game day horses,” he said.

“The trials he has had for us he’s been good and I expect him to run a nice race.

“It should tighten him up nicely for a second up run. I am not saying he won’t win first-up, I just think he will be better second-up.”

The Corstens will also saddle up Royal Obsession at Morphettville.

The Written Tycoon filly was also nominated for Swan Hill on Saturday but the stable will opt in favour of the 36° South Beef Maiden (1000m) where she will jump from barrier 11.

“We had a good look at both races and the dangle of the city race swayed us to head to Morphettville,” Corstens said.

“She will need luck from the barrier but she is going good.”