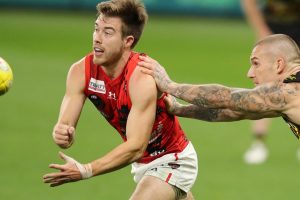 Essendon or Western Bulldogs rivalries will be parked on Tuesday at Pakenham as a cohort of Bombers rely on Dogs fans and trainers Ben and JD Hayes to cap a four-year dream with a win.

Bombers star Zach Merrett, who went to Melbourne Grammar with JD, will join a select group of footballers as an owner-breeder when Fight In The Dog steps out in the three-year-old maiden.

Co-trainer and Fight In The Dog part-owner JD Hayes, whose twin brother Will is on the Bulldogs list, has enjoyed sharing a passion for the horse with Merrett and company.

“Nothing improves them like ownership so he (Fight In The Dog) gets the top tier,“ Hayes joked.

“Even though they all get treated like equals here at Lindsay Park, he gets a little bit extra.

“It‘s a long process to buy the mare, get it served, foal it down and then educate the horse, but we have finally got to race day and I think he‘s in with a good shot.“

A connection to breeding empire Darley led Merrett to being offered a free service to then first season stallion Frosted – in exchange for social media posts.

Merrett called on JD to find a broodmare, Russian Ruby which they bought for about $30,000, to send to Frosted and the rest is history.

Apart from Merrett and the Hayes twins, Fight In The Dog is raced by past and present Bombers including Joe Daniher, Cale Hooker, Michael Hurley and Jobe Watson.

Essendon coincidently takes on the Bulldogs on Friday night in a season-defining Round 21 clash.

Fight In The Dog was entered to debut last month but a heavy track and wide barrier prompted Hayes to scratch and wait for another day.

The pint-sized gelding is rated a $10 chance with TAB.

“He‘s not the biggest horse out there but he does have a lot of character and he‘s quite tough,” Hayes said.

“He’ll stick his neck out, that‘s for sure.“