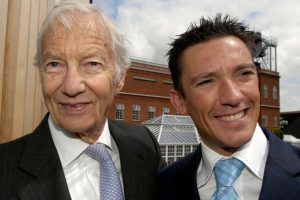 The former champion jockey said it happened after he taunted the veteran when he made a comeback at the age of 55.

Frankie, who claimed Lester had his eye on the finishing line, said: “As we come into the bend at the halfway point I glance to my left and see him behind me. He reaches over, grabs my balls and squeezes as hard as he can.

“The pain’s extraordinary. I feel my eyes watering behind my goggles. He says: ‘That’ll teach you to be cocky, you little sh*t’.”

In his new book, Leap of Faith, 50-year-old Frankie said: “I’m in his face telling him he should be in a museum, advising him to get the slippers out because there’s no way he’ll be able to keep up with us young bucks.

“We’re riding at Glorious Goodwood. There’s a big field, 20 runners or so. After the race, back in the weighing room, we watch a replay.

“I gather everyone round. ‘Lads’, I say, ‘watch out for where Lester grabs my balls. It’s coming up round about now.”

Where does Frankie Dettori rank amongst horse racing's greatest ever jockeys? Let us know in the comments section below.

But a dismayed Frankie added: “There’s a blind spot in the coverage of about 10 seconds where the cameras switch and the action’s too far away to be caught by either of them.

“He knows exactly where the cameras are, of course.

“I look across at him. Not a trace of a smirk passes his lips.”