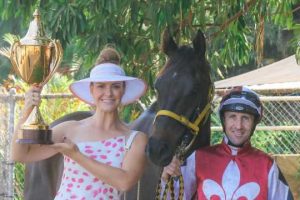 THE time-honoured Darwin Cup, first run in 1956, will be run and won on Monday on a huge 11-race program at Fannie Bay in the Top End.

Here is a look at every race to help you find a winner.

The four-year-old trialled well on July 13 but has had a slight setback with a hoof issue. Tricky draw but expected to run well with even luck.

Captain Bridges has his hoof on the til and looks the logical danger.

Colhoun with Bobby El-Issa in the saddle will be prominent early and She Shines Bright is capable.

Looks an even bunch and going with the value in Vunivalu.

The Phil Cole trained chestnut was ridden against his normal pattern last start but that won’t be the case here.

Expect the handle bars to be put down early.

Palmerston Sprint-winning trainer Chris Nash has Lido Beach engaged, he is a Ballarat synthetic winner and must be respected in his first run on the track.

Corporate Park Cup winner Carlingford is also right in this.

Will be interesting if Snows Bro backs up from Saturday when he ran 8th in the Palmerston Sprint.

The Peter Stennert-trained Tornado Of Souls has a terrific record from inside draws (+349% ROI from barriers 1-3) and he should be able to boot up and hold them out or take a sit and get the run of the race from barrier two.

Another Bit has always shown ability but has been a little inconsistent. He gets his chance to notch back-to-back wins.

Gary Clarke bypassed the Palmerston Sprint with his smart four-year-old Belmont Day to save him for the Lightning.

Returning to the 1000m looks ideal and if he steps cleanly and gets on the bunny it will be a case of ‘times and margins’.

So Stoic showed a welcome return to form last start.

If he can hold the back of Belmont Day he can get into the money somewhere.

Niewand ran a huge second in the Palmerston Sprint and if he backs up will be right there with 59kg.

The Stephen Brown-trained Really Swish caught they first-up in Darwin behind the smart Mini Boom in this grade then was a little plain in the home straight when up in class in the Bridge Toyota Cup.

This looks a much more suitable assignment.

It’s Magic hasn’t set the world on fire in his Top End campaign but he gains the services of Sairyn Fawke and will be ridden positively.

Yulong Awesome gets to a journey that suits now.

The lightly raced Moscow Mule gets to the mile for the first time and maps to get the right run in transit. Look for him to weave his way through the field late.

In what looks another even race it is likely to come down to who gets the luck in running. Must Be Moet is limited but tries her best.

If Southern Bolt can overcome the tricky draw he can feature.

A few of these like to roll along in front so expect this will be a truly run race.

Chief Minister's Cup winner That's Justified can sit off them and round them up despite the 63kg.

Coin Collector, Budget King (both Darwin Cup emergencies) and Safety Dance will all be looking for the premier position at the top.

Tactics to play a major role in this outcome in what looks a tricky affair.

The Neil Dyer-trained Bolek should be able to drive up into a nice position from the good gate.

Provided you can secure each-way odds that looks the safe play.

The Tayarn Halter-trained Don’t Wait was a good winner fresh then forgive last start when he tired after being involved in a speed battle behind Fort Knox.

Keep an eye out for Seeress ridden for luck along the rails.

The well fancied Syncline looks the pick of the Gary Clarke runners but interesting to note no.1 stable jockey Jarrod Todd has elected to ride Autocratic.

Although Syncline tasted defeat last start when Carlingford held him off the run was full of merit and he is the one to beat.

Much respect for More Chilli, he could find the front and is the main danger.

Trainer Angela Forster flirted with the idea of starting Spielberg in the Darwin Cup but has wisely resisted the temptation as he looks better suited to these shorter in high tempo races.

Tugga War jumps quickly to the 2050m here after his last start win where he has all the favours over the mile. Perhaps a bit more depth here but most of these have had plenty of chances.

Last season’s Darwin Turf Club staying horse of the year Skaldak should appreciate the class drop but is just finding it hard to win in recent times.

Count Of Essex is next best.

I Am The Fox passed his fitness test and we bank on him being healthy and ready to unleash the powerful sprint he possesses in the $200,000 Great Northern Darwin Cup (2050m).

The Alice Springs Cup win was outstanding and trainer Garry Lefoe has elected to only give him the one lead-up run where we saw him really attack the line behind Highly Decorated in the Chief Minister’s Cup.

It was a great Cup trial in the Metric Mile and we know master horseman Gary Clarke will have him peaking third up.

Despite being shuffled back in the field in the Metric Mile, Heavenly Emperor picked up late to suggest with the right run he can get into the money.

Danon Roman and Kaonic are the best roughies for the exotics.