Dalasan on the mend after scary incident before Spring Stakes 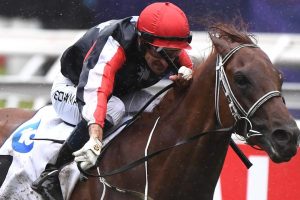 Leon Macdonald expects to know in the coming days if his stable will need a spring program rethink for Dalasan as his stable star continues to recover from a scary incident at Morphettville last Saturday.

The son of Dalakhani was fortunate to avoid serious injury after he escaped a handler near the raceday stalls and bolted home towards Macdonald and co-trainer Andrew Gluyas’ nearby stables.

Dalasan slipped over while on the loose, suffering several cuts and abrasions that forced him to be scratched from his first-up tilt in the Group 3 Spring Stakes.

The multiple Group 1 placegetter has been closely monitored since and it’s expected he will still play a big part in the spring at one point or another.

“Essentially he is all right but we won’t know for sure until the bandages come off,” Macdonald said.

“He has banged up a couple of his legs, the nearside front and off-side hind. Especially the off-side hind where he has a burn.

“He looks to be fine otherwise and he’s as bright as a button still. He’s been walking an hour a way.

“We would love to still be going to the Leon Macdonald Stakes and then Makybe Diva Stakes but that might not be possible so we will just have to wait and see.”

The Leon Macdonald Stakes – formerly the Penny Edition Stakes – is staged at Morphettville on Saturday August 28 while the Makybe Diva Stakes is at Flemington on September 11.

Dalasan finished fifth in last year’s Makybe Diva and is rated a $13 chance with TAB fixed odds to win the race in 2021.

The talented five-year-old’s spring setback comes at an unfortunate time but Macdonald was confident he would be back to his best before long.

It comes as the trainer is midway through a recovery of his own after fracturing his hip in a trackwork incident back in June.

The Hall of Fame conditioner was back on track on Saturday at Morphettville and continues to make positive strides in his recovery.

“I am slowly getting there and the last couple of weeks I have been improving,” he said.

Originally published asDalasan on the mend after scary incident