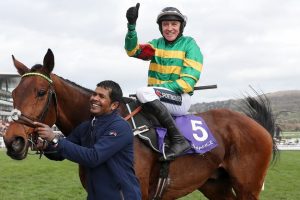 The JP McManus-owned gelding has not been seen in competitive action since charging home to beat the Irish pair of Minella Indo and Allaho in an epic finish to the RSA Chase at last season’s Cheltenham Festival, with an autumn wind operation delaying his return.

With connections losing the race against time to get him back for the Savills Chase at Leopardstown earlier this week, Henderson admitted options were limited – and even mooted a potential spin over hurdles.

However, the Seven Barrows handler now views the Cotswold Chase as as a suitable starting point for the season, even if it means he could clash with his stablemate Santini, who won the race last year before going on to finish runner-up in the Gold Cup.

Of Champ, Henderson said in his Unibet blog: “I’m pleased to say that he is in excellent form and the obvious race would be the Cotswold Chase at Cheltenham on Festival Trials Day.

“It might have to be for Santini as well, but we’ll cross that bridge when we come to it, because there’s also the Denman Chase at Newbury in February.

“Champ is coming along great and Nico (de Boinville) had a spin on him on Christmas Eve and he’s been jumping very well.

“There is nothing else before the Cotswold Chase, so I’d imagine he’d have a racecourse gallop beforehand which should put him spot on.”

It was a mixed Christmas period for Henderson, with star novice Shishkin impressing at Kempton, but both Epatante and Altior beaten at the Sunbury venue.

Shishkin is likely to have one more run before heading for the Arkle at Cheltenham, while Henderson feels it would be dangerous to dismiss Altior’s chances of winning a third Queen Mother Champion Chase despite his surprise defeat at the hands of Nube Negra.

Henderson said: “Shishkin has come out of Kempton very well and I’m extremely happy with him.

“I want to give him one more run before the Arkle and it will be in either the Kingmaker at Warwick or Game Spirit at Newbury, but I also have Altior pencilled in for that (Game Spirit).

“Altior is fine and there is nothing else to report except to say he will most certainly not be retired and you didn’t see the real him the other day.

“He’s probably getting to that stage where he may be losing a bit of that speed that has always been so potent, but the way he jumps at home you’d have no reason to think he’s slowing down – he’s still like a rocket.

“I would think there is every possibility that he will be given an entry in the Ryanair Chase, but we haven’t really discussed it and at the moment the Champion Chase remains the goal.”

He said: “I’m afraid you won’t be seeing Dusart for quite a while because we’ve had a very unfortunate setback and for the time being we’ll have to consider he is out of action.

“Without going into all the unnecessary gory details, he had an accident at home and is still at the equine hospital, but he’s doing well and will definitely be back, although I cannot say if he will be back this season or not.

“I’ve got to say it’s very doubtful that he will be going to Cheltenham.”