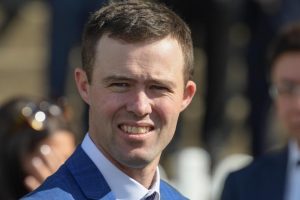 Punters tend to gravitate to Cody Morgan-trained horses when he has a big team racing at Tamworth but he’s more cautious than usual about their chances at home on Friday.

Many of his runners are well in the market but heavy rain in the region in the past month has made training horses difficult.

“It’s just been so wet up here in the past couple of weeks and I haven’t been able to get all the work into them that I would’ve liked,” Morgan said.

That’s not to say he won’t be winning races, and Morgan identified his best chance to be racing in the fifth event.

And the two-year-old hasn’t even had a run for Morgan yet after racing previously for Kacy Fogden in Queensland where he placed two times in his first three starts.

“He’s the one I’m going there the most confident with and I think he can run in the top three. He might want 1200m and I think he’s a horse going forward,” Morgan said.

“He’s a nice horse and I really like him. He’s trialled well too but I will say a lot of my horses will benefit from their runs, fitness-wise.”

Jappalouis is one of Morgan’s horses racing Friday that isn’t favoured by the punters who could send him out at $31 on debut in the third race.

“I wouldn’t be surprised if he ran a very nice race. He will run better than his price suggests.”

He has barrier eight with Rory Hutchings on board in what will likely be a capacity 14-horse field so he should get a good run in transit.

“He worked well during the week and he wants to please you. He’ll be better next time in but could surprise now,” Morgan said.

Yulong Base is coming into today’s eighth race as a well-supported horse even though he hasn’t raced since finishing down the track in a Highway race last September.

“He’ll need run. He’s back off an injury lay-off and I’d say he’ll be ridden conservative and be getting home,” Morgan said.

“He’ll be one to look at second and third-up. He trialled great and he’ll hit the line well”

Trumped Up is another the punters think can go back-to-back in the sixth race after scoring six weeks ago at his home track and he likes to race positive and will enjoy the conditions presented now.

“I’m not sure how the horse will handle a very wet track but it was a good maiden win and there’s a lot of form around it,” Morgan said.

“It’s a good time to find out if he’ll handle the wet ground on his home track.”

Manseneta will also thrive in the wet in the fourth race off a four-week freshen up.

“He’s going well and he does handle the wet and I don’t think he’ll be too far away in a pretty even race,” Morgan said.