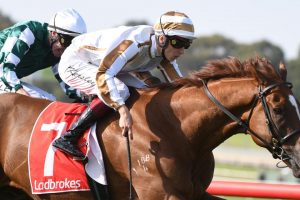 One ride on imported gelding Dice Roll convinced Caulfield trainer Nick Ryan he had a quality performer join his stable.

Dice Roll confirmed Ryan’s assessment with a strong Caulfield win at his Australian debut before the French-bred six-year-old remained unbeaten in Australia with his win in the Ladbrokes Bet Ticker Handicap (1400m).

Dice Roll won four races in France and ran third in the Group 1 French 2000 Guineas (1600m) in 2018 but failed to fire in 11 unplaced runs in Hong Kong before joining Ryan’s stable.

“He’s given me the feel since day one that he’s a Group horse,” Ryan, who won a Melbourne jockeys’ premiership before turning his hand to training, said.

Dice Roll sprinted too well for Yulong January in the straight, scoring by three-quarters of a length at his second start in 17 months.

“They don’t do what he’s just done second-up in two weeks and winning again,” Ryan said.

“It’s quite remarkable what this horse has done.

“Coming off such a long break and winning at Caulfield and then backing up second-up two weeks later and doing it again, he’s a very promising horse.”

Ryan will spend time mapping out Dice Roll’s short-term plans, which could include a crack at the rich Winter Championship Final at Flemington in July.

“I’ll probably give him a little freshen up now and we’ll come up with a program for him,” Ryan said.

“He’s probably going to stretch out to a mile as well. I think with anything with this horse, he’s that good that nothing will worry him.”