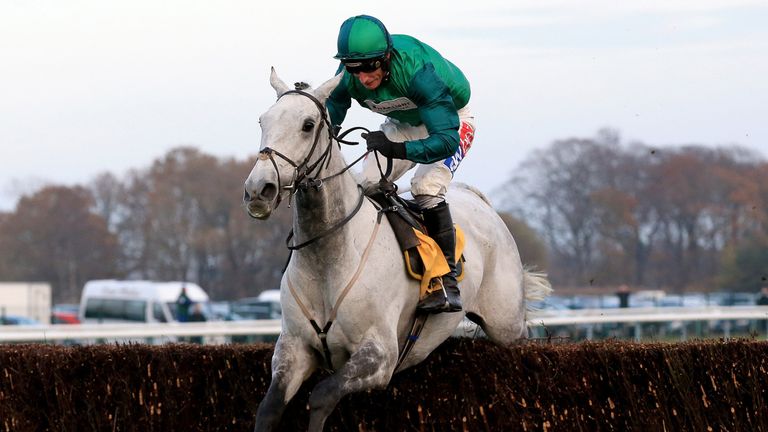 Bristol De Mai continued his love affair with Haydock when springing a surprise in the Betfair Chase at Haydock on Saturday.

Successful by 57 lengths in this race 12 months, the Nigel Twiston-Davies-trained grey upstaged the first two in last year’s Cheltenham Gold Cup, Native River and Might Bite, as he ran his rivals into the ground.

The 13-2 shot jumped superbly for Daryl Jacob and he kept pulling out more to hold the challenge of Native River in game fashion. Thistlecrack was third with Clan Des Obeaux fourth.

It was Bristol De Mai’s fourth win at the Merseyside track from four runs there.

The disappointment of the race was the evens favourite Might Bite, who weakened into last place after holding every chance.

Jacob said: “He’s unbelievable. Everybody was building this up as a two-horse race, but our camp had different ideas.

“We’ve believed in this horse a long time. This horse has won a Grade One every year he’s been over here. We’ve nurtured him.

“That was a big moment. He’s a great horse. It obviously was a disadvantage it not being soft ground, but at this track, there’s something about it he just loves and he feels a lot better.

“They were big fences and took some jumping. I got him into a lovely rhythm. He jumped super and you needed to jump today to win and that’s exactly what this lad did.”

Twiston-Davies said: “He’s one of the real top horses in the country and he grinds them down and wins by jumping well and galloping.

“First and second time out last season he was superb, then he started getting his aches and pains and taking a few lame steps. Hopefully second time out this year will be at Kempton and we’ll give them a hard time there.

“We don’t mind being the under dog. We were discussing on the way up here how it reminded us of Imperial Commander taking on Kauto Star and Denman in the Gold Cup. We were totally the under dog and then you go and stuff them like that!

“We’re lucky as we have the best gallops in the world and we bring them here fit. Maybe the others weren’t quite fit, I’m not sure.

“What we’ve got to do is bring this horse fit and keep him right.

“Today is brilliant. When you know you can’t win, it’s great when you do!”

Colin Tizzard was pleased with both Native River and Thistlecrack.

“They both ran right up to their best on this track. You must not take anything away from Bristol De Mai. He won this race last year by 57 lengths on heavy ground. That was probably against him today,” he said.

“He’s a very good horse this time of year, so our two ran well. To be fair to Native River, he was flat out most of the way. We’re just trying to win a Gold Cup. I don’t want to give them a light campaign all the time.

“I think three, four or five runs before a Gold Cup. Last year we got away with having two. He’ll be better if he ran more often, so he might go to the King George.

“There’s nothing else really – the Cotswold Chase. We will have to sit and wait about that for a week.

“Thistlecrack has been off for a year and everyone was writing him off. These are the biggest fences I’ve ever seen and as tight as any I have ever seen.

“Thistlecrack has done his job. I’m sure he’ll go to the King George. It’s a shame the Hennessy (Ladbrokes Trophy) isn’t three weeks away. I could just see him carrying top weight in that, but I don’t think I will run him next week.

“He’s shown he’s right back to his very best and I think Native River ran up to it. We’ve just been beaten by a better horse round here at this time of year.”

Henderson felt Might Bite’s jumping had not been as sharp as usual on his seasonal bow.

He said: “He’s obviously had a big blow turning in.

“His work has been terrific, but he was just jumping too much up in the air. He was like that as a young horse if you remember – he got beaten over fences at Ffos Las one day when he spent about two hours in the air.

“They have built us some big fences here today and he nudged one early on and it’s not the first one of mine that has been caught out today (River Wylde fell earlier on the card).

“He was using up a bit too much petrol jumping up in the air. He looked as if he was coming into the race at one stage, but he was beaten too soon.

“He wasn’t jumping like usual – normally he’s just deadly – but it wasn’t just that.

“We’ll have him scoped and check him over. Maybe he just wasn’t as straight as we thought and it’s as simple as that. Instead of blaming fences maybe you’ve got to blame the trainer.”