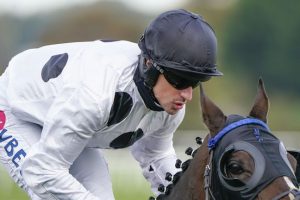 Champion jockey Brian Hughes has given his backing to the British Horseracing Authority’s medical team amid reports the ruling body is considering the introduction of a new coronavirus testing system.

Racing was the first elite sport to return last June following a three-month shutdown to combat the outbreak of Covid-19.

However, while strict protocols have been in place ever since – with all attendees required to complete a health questionnaire prior to each meeting and undergo temperature checks before being allowed entry – coronavirus testing has not been implemented, unlike in some other sports.

With a more virulent strain of the virus causing a significant rise in positive cases since Christmas, football’s Premier League and the EFL have moved to a more robust screening process, with players now being tested twice a week.

According to reports on Wednesday, the BHA is currently weighing up the possibility of following a similar model for jockeys.

Hughes said: “I’m in support of keeping everybody safe. I feel Dr Jerry Hill (chief medical adviser) of the BHA has done a very good job in keeping us all safe – all the protocols and biosecurity measures that have been put in place I feel have worked very well.

“All the precautions that have been put in place are for our benefit. I feel it is working well, but if they feel that (testing) is necessary for the sport, I have no objections.

“From trainers, to owners, to stable staff, jockeys’ valets and all people that work at the races, everyone involved has pulled together.

“Everyone is learning all the time about Covid and the way it’s changing. Anything we can do to keep everyone safe is only a good thing.”

Conservative MP Laurence Robertson, chair of the All Party Parliamentary Group for Racing whose constituency includes Cheltenham, told the Daily Mail that testing should be introduced.

He said: “It would be a good idea for more testing to be done at racecourses, particularly if we can get a rapid rollout of quick turnaround tests.

“Last summer we were restricted to testing people showing symptoms, but that is no longer the case.”

Measures to try to prevent the spread of coronavirus on racecourses have been strengthened in recent months, with face masks made mandatory in October and owners prevented from attending since the turn of the year.

A BHA spokesperson said: “Racing’s coronavirus control protocols are approved by UK Government. Racing is a predominantly outdoor, rural, non-contact sport and it was agreed by DCMS and Public Health England that for this reason – allied to the stringent, bespoke controls that have been put in place on racecourses – when racing resumed it would not require an ongoing mass-testing programme, but instead would utilise a strict health screening approach.

“The sport’s protocols are working well, and the industry has acted very responsibly in terms of observing Government guidance. As a result there has been no evidence observed of transmission of the disease on racecourses since the sport resumed on June 1, from around 800 fixtures.

“However, we are constantly monitoring the situation and liaising with the industry and training hubs. We take an agile approach, and our protocols are under constant review to determine how racing can continue to strengthen our approach and best safeguard our people.

“Owing to the new variant of the disease the picture is changing – and should evidence show it is necessary, then testing is an option that may be helpful. As ever, we will be led by the science, data and evidence.”