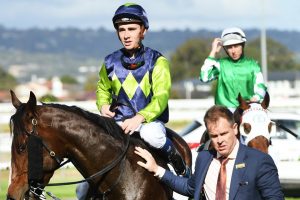 The Australian jockeys’ premiership is now at the mercy of West Australian gun Chris Parnham despite picking up a careless riding charge when piloting a double at Belmont on Wednesday.

Parnham booted home winners aboard Cape Reign and Miss Vasari at the metropolitan meeting to take his tally to 193 winners with fierce rival Blaike McDougall on 191 with a pair of dead heats.

A careless riding charge picked up at the meeting would be the only sour point for Parnham however he was afforded an adjournment to consider his plea, which will delay any suspension that might be imposed.

Parnham also boasts a big advantage on his NSW country rival over the next four days with 26 rides across four meetings beginning Thursday at Pinjarra where he’ll be legged up on six runners.

He will rack up the kilometres with rides at Broome (Friday), Belmont (Saturday) and Kalgoorlie (Sunday).

McDougall doesn’t ride again until Saturday at the Sapphire Coast after Friday’s meeting on the Canberra Acton track had to be postponed because of clogging to the venue’s drainage system.

The NSW country star had rides in all eight races on the card and has 13 booked across Sunday and Monday’s meeting at Corowa.

TAB fixed odds now list Parnham as the $1.50 favourite to lift the national title while McDougall, who had a double at Nowra earlier this week, is $2.50.

The season raps up next Saturday, July 31.