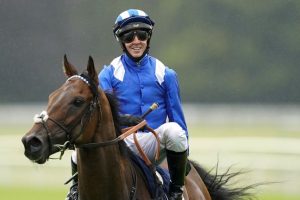 Battaash bids to thrill the Goodwood crowds again with an unprecedented fifth triumph in the King George Qatar Stakes.

The seven-year-old secured his place in Goodwood history when winning his fourth edition of the Group Two sprint last summer, although only a handful of people witnessed his triumph because coronavirus restrictions meant there were no racegoers on course.

Spectators are back in force on the Sussex Downs this week, though, and Battaash will be trying to regain the winning thread on Friday – after having to settle for fourth in the King’s Stand Stakes at Royal Ascot on his return.

Despite that two-and-a-half-length defeat, Angus Gold, racing manager for owners Shadwell Estate, was more than satisfied with Battaash’s effort after a setback during the winter had delayed his return to trainer Charlie Hills’ care.

Gold said: “It was well documented that he hadn’t been back in training long before Ascot, so it didn’t surprise me that he needed it. I actually thought he ran particularly well, considering.

“He showed us all his old dash was still there – he seemed very happy to be back at the races, behaved himself well, so there were a lot of positives to take out of it. They went very, very hard – he sat just behind them, came through to take it up and just blew up and got tired.

“Hopefully he has come on from that. It’s an obvious fact he’s not getting any younger and at some stage he will start to slow down, but hopefully not yet.”

Battaash is a four-time Group One winner and was unbeaten in three outings last term, rounding off with a length victory in the Nunthorpe Stakes at York before a possible Breeders’ Cup challenge was ruled out.

The Dark Angel gelding has also been placed multiple times at the highest level in a career which began with a Bath novice win as a juvenile back in 2016.

However, Gold admits it will be a “special” moment if Battaash can further add to his Goodwood laurels – particularly with a crowd in attendance.

Last season also saw Stradivarius win a third Gold Cup at Royal Ascot, while Enable became the first triple victor in the King George VI And Queen Elizabeth Stakes – other notable achievements which were largely witnessed on TV rather than in person.

Gold added: “It would be special for everyone – it doesn’t happen very often. It would be very special if he could pull it off.

“It’s already pretty remarkable, four years in a row – so if he can do one more, that would be even better obviously.

“It’s great for racing – him, Stradivarius and Enable last year. We were blessed last year, and sadly no one could witness it, so let’s hope we can make up for it this year.”

The market suggests Archie Watson’s three-year-old Dragon Symbol is Battaash’s main rival – but he is dropping down in trip after two creditable efforts in Group Ones over six furlongs.

One who brings top-class five-furlong form to the table is Kevin Ryan’s Glass Slippers, winner of the Flying Five in Ireland and at the Breeders’ Cup last year, while John Quinn has two live each-way chances in Liberty Beach and Keep Busy.

Arecibo has improved 21lb since his switch to Robert Cowell this season – and after finishing second in the King’s Stand two starts ago, sprint king Cowell is hoping for another bold show.

“I couldn’t have dreamt what he’s done so far for us this year,” Cowell told Sky Sports Racing.

“He’d been working very well up until the point of going to Newmarket (in April), and we thought he was a bit of a handicap good thing there, but to progress to the King’s Stand and be second there was brilliant.

“It was no fluke as he backed it up with a good performance at Sandown.

“It’s a tougher race, but we feel a better race will make him a better horse. We’re looking forward to it – the ground is right, and we’re going with a little bit of hope.”