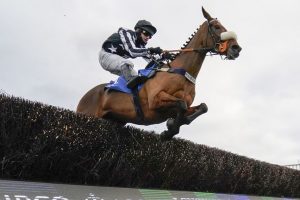 Kim Bailey has his fingers crossed that Imperial Aura continues his rapid progression in the Ladbrokes Silviniaco Conti Chase at Kempton on Saturday.

Winner of a handicap at the Cheltenham Festival last March, he reappeared with a smooth success at Carlisle and handled the step up in class with aplomb to win a Grade Two at Ascot last time out.

He carries a penalty for that success and is among the leading British-trained contenders for the Ryanair Chase at the Cheltenham Festival.

“This race has been the plan for some time now,” said Bailey.

“We’ve got our fingers crossed that he keeps going in the right direction.

“Whether two and a half miles is sharp enough for him trip-wise around Kempton, we’re not going to find out until the race!

“He hasn’t put a foot wrong to date this season, but the form of his last race at Ascot doesn’t look very strong now – it’s difficult to assess really.”

Paul Nicholls is taking on the favourite with Master Tommytucker, who has been a reformed character this season.

His jumping has let him down in the past, but he has put in four clear rounds this season and made a valiant attempt off top weight at Cheltenham last time out.

“His jumping has improved a lot since he was last at Kempton and this looks a nice race for him with only a handful of runners,” Nicholls told Betfair.

“I thought he ran all right for a long way off top weight and learned plenty in the Caspian Caviar Gold Cup at Cheltenham, which was a seriously competitive race.

“I am expecting a big run from Master Tommytucker, with Imperial Aura the one to beat.”

Nigel Twiston-Davies is hoping the freshness has been knocked out of Riders Onthe Storm after he ran no race in the Shloer Chase at Cheltenham.

He fell in last season’s Ryanair when still holding every chance, having won a Grade One at Ascot prior to that.

“Riders Onthe Storm is in really good form. He was a bit of a lunatic on his first time as he was very fresh, but he is more settled now. We are looking forward to this,” said Twiston-Davies.

“There are very few races a horse of his class can go for, but going back up to two and a half miles is plus for him. I’d imagine we will take this in en route to the Ascot Chase then the Ryanair.”

While Tom George’s Clondaw Castle is the outsider of the four runners, he has put up three good efforts this season and was slightly unlucky behind Mister Fisher last time out.

He had earlier won a good handicap at Newbury and finished second in the Old Roan at Aintree.

“Clondaw Castle definitely got hampered at the wrong moment last time and the ground would have been soft enough for him that day at Cheltenham, so we just hope they don’t get too much rain or snow,” said George.

“He’s definitely progressing, we’ve seen an improvement in him at home as well, so I think he’s heading in the right direction.”