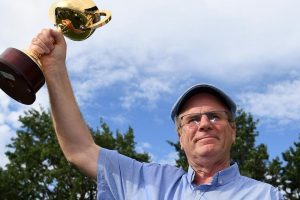 Racing Victoria could seek to bankrupt disqualified trainer Robert Smerdon, should it be unable to recover a combined debt of about $200,000.

Following its decision to disqualify 72 horses embroiled in the Aquanita scandal, the peak body has a “genuine desire” to claw back prizemoney paid to the implicated former trainers, including Smerdon.

Aquanita trainers Smerdon, Stuart Webb, Tony Vasil and four stablehands were disqualified in 2018 and 2019 for engaging in improper or dishonourable actions in connection with racing.

Smerdon trained most of 72 horses RV disqualified last Tuesday, with early estimates suggesting his runners alone raked in about $1 million in prizemoney.

Trainers are entitled to 10 per cent of any prizemoney their horses win.

Tony Vasil was also disqualified for his role in the Aquanita saga.Source:News Corp Australia

An asset check would determine the best course of action.

“If they don’t pay, you will need to enforce the judgment or move to bankruptcy proceedings,” Jade said. “The issue is, if they’ve got no money there’s no point spending further money to recover nothing.

The disgraced trainers have 60 days to appeal the stewards’ decision to disqualify the 72 starters, including Smerdon’s Grand National winners Black And Bent (2011) and Brungle Cry (2012).

RV boss Giles Thompson said “all the measures at our disposal” would be used to recover the “amount that is due to the industry”.

“This was a systemic cheat by a small number of individuals,” Thompson told RSN 927 this week.

“It’s incumbent on us at Racing Victoria to ensure those fines and prizemoney are repaid by those individuals, they have done the wrong thing and they should be made to pay the full amount.”