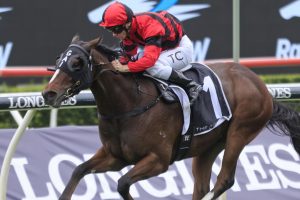 The absence of clear Champagne Stakes favourite Anamoe is likely to see Tulloch Lodge pull the trigger on the quick back up with Saturday’s winner Converge likely to get his chance in the Group 1 next weekend.

Sires’ Produce Stakes victor Anamoe was the $1.50 favourite to make it back-to-back Group 1s this autumn until Godolphin informed Racing NSW Stewards on Saturday the colt would be sent to the paddock.

It has made next Saturday’s Champagne Stakes wide open and Converge has emerged as one of the leading contenders following his easy win in the Listed The Agency Real Estate Mile (1600m), known officially as the Fernhill Handicap.

Despite the drift Converge wins the opener for @[email protected]#TheChampionshipspic.twitter.com/rGIbwa3S15

The promising son of Frankel sat in the stalking position before surging clear late to score by 1-1/4 lengths on Day Two of The Championships.

TAB.com.au reacted by cutting the price of Converge from $15 to $7 for the Champagne Stakes and Bott said it’s likely that’s where he will line up.

“I think he should handle the quick back up,” he said.

“He seemed to have pulled up well looking at him on Saturday and we’ve always left the option open heading towards a Champagne.

“Saturday took away any concerns that he could run out a mile so we will give it really strong consideration.”

With just four starts to his name and a gelding, the option of running Converge in Queensland after a Champagne Stakes tilt remains on the table.

It would see the two-year-old follow the Queensland path through the $1 million BRC Sires’ Produce (1400m) on May 29 before the $1 million JJ Atkins Stakes (1600m) two weeks later on June 12 with both races held at Eagle Farm.

“The alternative would be to freshen up and go through the Sires’ and JJ Atkins in Brisbane,” Bott said.

“We could potentially still do both.”