Albury preview: Tony and Calvin McEvoy are confident Silent Sovereign is ready to peak for Cup 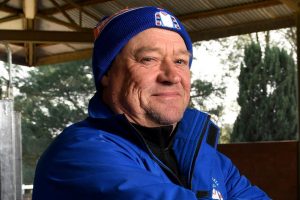 Tony McEvoy knows how to win an Albury Cup (2000m) and he’s back to do it again with emerging stayer Silent Sovereign.

The four-year-old grey is out to emulate Kourkam who won the race for McEvoy in 2015 and this time a win would be in partnership with son Calvin.

Silent Sovereign has a win and two fourths this time in, all on Melbourne tracks in Saturday grade including the Group 3 Matron Stakes a fortnight ago.

“Her first-up win was exceptional and she was very unlucky not to win second-up, I feel.

“At her third run it was a very strangely run race when that leader went out and led by eight lengths. No-one really worried about it and they just couldn’t pick it up.”

She’s had two runs over 2000m for unplaced efforts and ran second in the Group 3 SA Fillies Classic over 2500m when she came from 14th at the 400m, so she’ll stay he trip today.

“She’s ready for 2000m again now. She just found that mile race a little sharp the other day so I think it’s the perfect time for her to get out to the 2000m,” McEvoy said.

Another positive for the McEvoy men is the booking of the region’s leading rider Blaike McDougall.

McEvoy has wanted to team up with the young hoop for some time now and finally gets the chance.

McDougall is the leading rider in the NSW Jockey Premiership with 121 ½ wins this season – 4 ½ ahead of star rider Tommy Berry.

His strike rate is a very good 22.2 per cent and McEvoy naturally hopes he’ll improve that stat on Friday.

The fact he’s ridden plenty of races at Albury is a huge factor in the Group 1-winning trainer’s eyes.

“You’ve got to know your tracks and I thought Blaike would be a very good option for us,” McEvoy said.

“He’s a very talented rider. I haven’t used him before but I’ve watched him. I haven’t had the opportunity to use him but he’ll give that mare every chance.”

McDougall will need to ride a good race because he’s drawn awkwardly in barrier 11.

“She’ll just sit off the speed and hopefully we can find some cover,” McEvoy said.

The main threats in the $200,000 Listed race look to be the Gai Waterhouse/Adrian Bott-trained Entente and Mahamedeis for Victoria trainer Nick Ryan who placed his horses very well.

“I’m not sure. I think I’ll go to Adelaide,” McEvoy said.

“He hasn’t been to Sydney much and I didn’t really love it when he was there so I think we’ll go to the Goodwood and Dollar For Dollar might end up there as well.”

SHEPPARD HAS RACKETEERING PRIMED TO GET THE MONEY

It’s been a long wait to get Racketeering back to the races and as long as the Port Macquarie track holds up, he will be ready to fire in the final event on the card on Friday.

The four-year-old put together a good record (4-2:1:0) which included two wins at his past couple of runs.

The only problem is punters haven’t seen the Lisa Sheppard-trained runner since his last win at Coffs Harbour in May last year.

“He’s had a few little hiccups, nothing major but I just couldn’t get him right. He had a virus then was a bit sore in places. It’s all behind him now,” Sheppard said.

“He trialled up really well and he looks really good so he’s back on the right track. He pulled up well from his trial so things are good.

“He got the weight I thought he’d (60kg) get but I was hoping for a little but less. He has carried weight before.”

The son of Trusting has regular rider Ben Looker on board from an inside draw and his ride and judgment will be key to Racketeering.

“He does get back so barrier three probably isn’t an ideal draw for him. It is in a normal situation but we’ll go back and come around them or he might ride for luck, it’s up to him,” Sheppard said.

“It’s been raining on and off up here since Christmas so it hasn’t had a chance to dry out but he does handle the wet ground. It will be a Heavy 10.”

If Racketeering can bring up win number three it will virtually force his trainer to bring him to a Highway once the Sydney autumn carnival ends next month.

“We’ve looked at the Country Championships with him for the past two years in a row but it hasn’t worked out for him,” Sheppard said.

“The way he has won in the past gives you an indication he’s at that level so a Highway wouldn’t be out of the question and that’s our aim unless we go to Brisbane.”