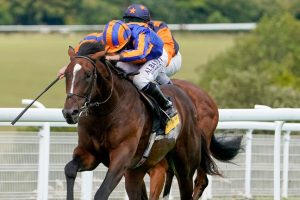 Aidan O’Brien’s trio of Battleground, Van Gogh and Wembley are among 15 colts declared for the Qipco 2000 Guineas at Newmarket.

The Ballydoyle handler has saddled a record 10 winners of the Rowley Mile Classic and launches another formidable assault on Saturday.

Wembley is officially the highest-rated of his three runners on what will be his first appearance since being touched off by stable companion St Mark’s Basilica in the Dewhurst at Newmarket in October.

Battleground was last seen filling the runner-up spot at the Breeders’ Cup, while Van Gogh has been off the track since landing Group One honours in the Criterium International at Saint-Cloud.

Joseph O’Brien, Aidan’s son, has a leading contender in Thunder Moon. The son of Zoffany beat Wembley when winning last season’s National Stakes at the Curragh, but was behind the same rival when third in the Dewhurst.

The home team includes three Charlie Appleby-trained hopefuls in One Ruler, Master Of The Seas and Naval Crown.

Naval Crown inflicted a shock defeat on Master Of The Seas in Dubai earlier in the year, but the latter bounced back to winning ways in the Craven Stakes over the Guineas course and distance a couple of weeks ago.

With William Buick deciding to stick with Master Of The Seas this weekend, James Doyle partners One Ruler, who rounded off his two-year-old campaign by finishing second in the Vertem Futurity Trophy at Doncaster.

The Charlie Hills-trained Mutasaabeq was mightily impressive when winning a conditions race at the Craven meeting, which ultimately led to connections supplementing for the Guineas earlier this week.