Home » Golf » When is the Ryder Cup? Dates, schedule, who is qualified for Europe and USA?

When is the Ryder Cup? Dates, schedule, who is qualified for Europe and USA? 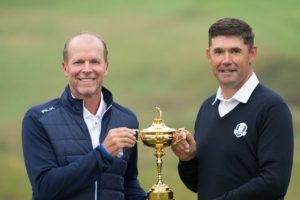 After postponement last year due to the coronavirus pandemic, the Ryder Cup returns to the golfing calendar in 2021 after three years away. Team Europe and Team USA will once again lock horns for one of the most prestigious prizes in golf, in the 43rd installment of the event.

It will be Team USA who play on home soil this year, however it is Europe who head to their opponents’ shores with the title in hand after victory in 2018 at Le Golf National in Paris.

Despite the Americans going into the event as defending champions it was Thomas Bjorn’s Europe who came out on top in France,  as a convincing 17 ½ – 1- ½ victory over their opponents ensured the Ryder Cup crown returned to the Europeans.

When is the Ryder Cup?

The Americans will look to regain the trophy at home this year though, with the event taking place at the iconic Whistling Straits in Wisconsin. The tournament will begin on Friday, 24 September 2021 and end on the following Sunday.

JUST IN: Rory McIroy credits wife for change of perspective at Olympics

Both teams elect a new team captain at every event, and Steve Stricker will take charge of Team USA at Whistling Straits whilst Team Europe will be under the guidance of Padraig Harrington.

The two sides will compete across the three days in three different groupings; fourballs, foursomes and singles and will use match play to determine a winner from each group.

The schedule is as follows:

The first six spaces of the American team are selected via their Ryder Cup standings, with the six players with the most points following September’s BMW Championship guaranteed a spot at Whistling Straits.

Captain Stricker will then be allocated six wildcard picks to complete his team.

Team Europe’s side is made up of nine qualification spots, with the top four from the Race to Dubai standings securing a place and the remaining five selected from the world points list, who are not included in the Race to Dubai top four.

Like Stricker, Harrington will then be allowed to select his remaining three players via the wildcard picks.