At the end of an extraordinary high-stakes six-man play-off like no other in the history of the European Tour, Englishman Tyrrell Hatton claimed the Turkish Airlines Open, together with its £1.7million prize.

The man who has to take painkillers before every round to cope with a nagging wrist injury might need some for a hangover this morning after a win that will enter the annals.

A shade under seven hours after he began his final round, and under the floodlights that line the par-five 18th hole at Maxx Royal, the 28-year-old from Marlow outlasted Austrian Matthias Schwab to claim a prize that meant so much — a staggering difference in prize money of £1.36m, simply for starters. 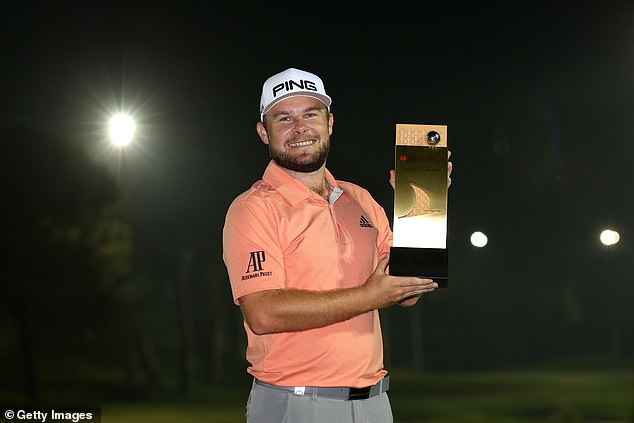 Hatton can now draw a line under a year that had seen him fall to 48th in the world rankings — he’s now back inside the top 30 — with the spoils also including an invitation to the Masters next April.

‘Sport is great when you’re playing well but this year other stuff has happened, and I said to my team before the play-off that I would really savour this triumph if I won, after all that has gone on,’ he said.

‘I’m just so happy, and there’s nothing better than getting that Masters invite through the post in December.’ It was difficult not to feel for 24-year-old Schwab, who led the tournament from the first day to the 71st hole. But a disappointing par at the last meant he was caught by no fewer than five players.

You have to go all the way back to 2003 and the Dunhill Championship in South Africa to find the last six-man play-off. You could say times have changed.

Back then, Englishman Mark Foster prevailed for his only tour win, and the difference between his cheque and the five runners-up was £66,000, not £1.36m. 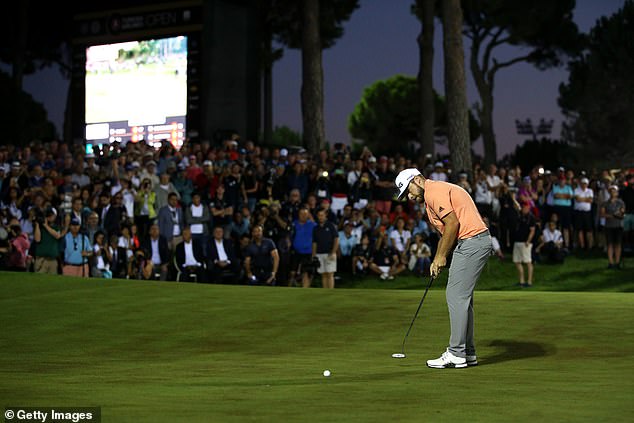 It looked as if Hatton would join them when his chip from the back of the green fell off the putting surface at the front. Now he had to hole his 45ft chip for a birdie simply to stay alive. ‘I thought about my days growing up, where I’d practise my chipping for hours on end and not finish until I’d holed three in a row,’ he said.

It worked, and he showed his delight with a triumphant clenched fist salute.

At the second extra hole, American Kurt Kitayama, bidding to become the first rookie to win three times on tour in his debut season, had a putt from eight feet for victory, but missed.

He dropped out at the third time of asking, as Schwab holed a gutsy 20ft putt to join Hatton in playing on. 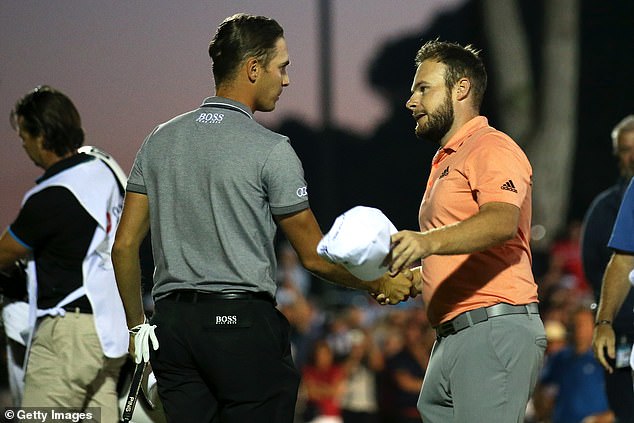 By now, more than 90 minutes after the play-off began, a full moon had appeared, and thank goodness for the floodlights, meaning no anti-climactic Monday finish.

Playing the 18th hole once more, Hatton had an eight-foot birdie putt to win but it grazed the edge. Now Schwab had to hole from five feet to stay alive, but he missed as well.

It was a sad way to conclude matters and particularly for a player who had contributed so much to the week.

For Hatton, his name is back in lights after this victory under them. Following the season-ending event in Dubai in 10 days, he will have his wrist operation, having added another memorable chapter to the legend of ‘beware the injured golfer’.