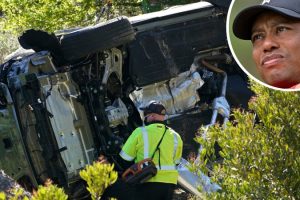 Woods’ Twitter account posted Friday evening: “Tiger has moved to Cedars-Sinai Medical Centre and received follow-up procedures on his injuries this morning. The procedures were successful, and he is now recovering and in good spirits.

“Tiger and his family want to thank you all for the wonderful support and messages they have received over the past few days. We will not have any further updates at this time. Thank you for your continued privacy.”

Woods, 45, was hurt in an early-morning, single-car crash near the border of Rolling Hills Estates, California, and Rancho Palos Verdes, California. Emergency personnel extracted him from his car and transported him to Harbor-UCLA Medical Center.

He underwent surgery this week to treat multiple injuries to his right lower leg, including the insertion of a rod into the tibia. Additional screws and pins were needed in the leg, and he was treated for muscle and soft-tissue injuries.

Woods subsequently was moved to Cedars-Sinai Medical Centre “for continuing orthopedic care and recovery,” according to a Thursday statement from Dr. Anish Mahajan, the chief medical officer and interim CEO at Harbor-UCLA Medical Centre.

The roll-over crash, in which Woods had to be extracted through the windshield, was an accident and no criminal charges will be filed against Woods, Los Angeles County Sheriff Alex Villanueva said.

The black box from Woods’ SUV will provide investigators with information on how fast he was driving when he lost control just after 7am Tuesday, Villanueva said. The sheriff said there was no evidence that Woods was impaired when he crashed and hence no probable cause to test his blood-alcohol level or do a toxicology screening at the hospital.

The road where the crash occurred is known for its steep grade and twisting curves that can lead to high rates of speed when travelling downhill.

Villanueva had previously said the vehicle was travelling at a relatively greater speed than normal down Hawthorne Boulevard near Blackhorse Road when it crossed the centre divider, struck a tree and then rolled over, coming to rest about 30 yards up a hillside.

Woods was already recovering from his fifth back surgery when he got behind the wheel. By the time he was pulled from the vehicle, he was so dazed, he did not realise the extent of his injuries.

Los Angeles County Sheriff’s Deputy Carlos Gonzalez was the first to arrive at the scene of the accident.

“Mr. Woods was not able to stand under his own power,” Gonzalez said. Woods had to be strapped to a backboard before emergency responders loaded him into an ambulance for the drive to the trauma unit at Harbor-UCLA.

“I spoke to him,” Gonzalez said. “I asked him what his name was. He told me his name was Tiger, and at that moment, I immediately recognised him.”

Although Tuesday’s wreck was the third time Woods was involved in a high-profile vehicle incident, it was by far the most serious. The first two did more damage to his reputation; this one could end his career.

In 2009, as he backed his Cadillac SUV out of his driveway in a gated Florida community, he struck a fire hydrant and slammed into a neighbour’s tree. Eight years later, he was arrested in Jupiter, Florida, after police officers found him asleep at the wheel of his car. Woods later said that incident was caused by an “unexpected reaction to prescribed medications.”

The PGA star was in Los Angeles as the host of the Genesis Invitational at the Riviera Country Club, a golf tournament that concluded Sunday. Woods did not play in the event, because he was recovering from back surgery, but told CBS announcer Jim Nantz in an interview during the final round that he hoped to play the Masters in April.

“God, I hope so. I’ve got to get there first,” Woods said in the interview. “A lot of it is based on my surgeons and doctors and therapist and making sure I do it correctly. This is the only back I’ve got – I don’t have much more wiggle room left.”

Woods stayed in Los Angeles County after the Genesis Invitational to participate in a two-day shoot with Golf Digest/GolfTV. On Monday, a smiling Woods spent time with retired NBA star Dwyane Wade and comedian David Spade – both of whom documented the gathering on social media – at Rolling Hills Country Club.

Woods, who was staying at the Terranea Resort in Rancho Palos Verdes, was en route to the Rolling Hills Country Club, about 20 minutes away, for filming when the crash occurred.