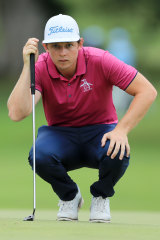 Cameron Smith enters the final round of the Sony Open a big chance of victory.Credit:Getty Images

Cameron Smith has momentum and a great chance to start 2020 with a US PGA Tour victory, sitting second heading into the final round of the Sony Open in Hawaii.

The Australian started the third round one off the lead and slipped back before birdieing four of the last five holes to card a four under 66 at Waialae Country Club on Saturday.

He will play in the final group with the leader, American Brendan Steele, who has grabbed a three-shot lead at 12 under after carding a 64.

Already closing on $US10 million in tour earnings, 26-year-old Smith is seeking his second win, and first individual title, having shared in a two-man team event victory in 2017.

Steele is chasing his fourth PGA Tour victory, and first since repeating at the Safeway Open in 2017.

The 36-year-old is coming off a disappointing season where he failed to capitalise on his trademark stellar driving.

"All facets of my game are as good as they've ever been, coming off my worst season on tour," Steele said.

"I'm really excited about my trajectory and where things are going [but] I've been out here long enough to know that it's always difficult."

Young Australian Cameron Davis can also give his tour career a big boost on Sunday.

Despite slipping back to tied 11th after a 71, he is still only five shots behind Steele.

Matt Jones is next best of the Australians at tied 30th (two under), ahead of Marc Leishman (one under) Rhein Gibson (two over).