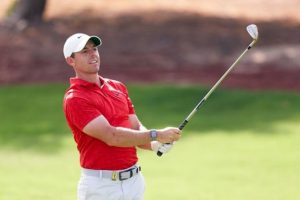 Rory McIlroy is one shot clear at the top of the DP World Tour Championship leaderboard following yet another remarkable day of golf at the Race to Dubai finale.

The Northern Irishman carded an impressive five-under-par 67 on Saturday, leaving him one shot ahead of Englishman Sam Horsfield heading into the final 18 holes of the European Tour campaign.

Open champion Collin Morikawa has also left himself in the perfect place to collect the lucrative Race to Dubai title, as a steady, bogey free three under-par 69 ensured he stayed just three off the DP Tour World Championship lead, and top of the projected Race to Dubai standings.

McIlroy headed into moving day just one shot off the lead, and headlined Saturday’s field alongside Race to Dubai leader and Open champion Morikawa, in a star-studded two ball.

The Northern Irishman was looking to build on his day two two-under-par 70 on Saturday, however things did not start how he, and the Dubai crowd expected as he snap-hooked his opening drive into the desert sand and trees down the left.

McIlroy managed to escape from the danger relatively well, before sneaking away with a bogey five to drop a shot at the first.

What would follow however was the four-time major champion at his best.

The 32-year-old had talked extensively about his mindset in recent months, after enduring somewhat of a career lull following the restart of golf since the COVID-19 pandemic.

Despite this the Dubai spectators were treated to the McIlroy of old, as he responded from his opening bogey by birdieing both two and three to ensure his stay over par was a short one.

He then followed this up with a further two birdies at the par three sixth and par fourth ninth, to ensure he was the man leading the tournament outright as he entered the turn on day three.

Onto the back nine and McIlroy’s birdie train continued, as he added two more at 11 and 13 to move him two clear of the chasing pack, as the sun began to set on the iconic Dubai Earth Course.

It looked as if the only blemish on the card would be his bogey at the first, however more trouble was to follow as he flew his tee shot on the par three 17th towards the water hazard.

Somehow the Northern Irishman’s ball remarkably stayed dry by holding up the hazard’s rockside, leaving him with an extremely awkward second shot into the green.

Most would have taken a shot penalty drop in this case but not Mcilroy. He played a remarkable wedge shot off the rock over to the far side fringe, before nearly rolling in his next chip for what would have been the most outrageous par.

Despite the drop shout the four-time major winner reacted in style, as he birdied the very next hole at the par five 18th to return him to 14-under ahead of tomorrow’s final round.

One man travelling under the radar around the Earth Course was Englishman Horsfield.

Whilst all eyes seemed to be fixated on McIlroy, the 25-year-old continued to play some of the golf that has made one of the Tour’s rising stars this campaign, and after eagle at 14, he then secured back-to-back birdies at 15 and 16 to put him ahead of the Northern Irishman and the rest of the field.

However it would be McIlroy who would take the one shot lead heading into day four, as Horsfield could only follow up the Northern Irishman’s birdie at 18 with a bogey resulting in a two-shot swing in day three’s final moments.

It was no doubt a day for the Brits in Dubai as Scot Robert MacIntyre also kept his name well in contention thanks to another impressive showing.

After sandwiching a bogey in between two important birdies at two, three and four the young Scot went on to pick up a superb eagle at the par five seventh before dropping another frustrating shot with a bogey at nine.

MacIntyre however did not seem phased by his slip up just before the turn, as he went on to card four birdies in the first five holes of the back nine to ensure he was just two off the lead heading into the final day.