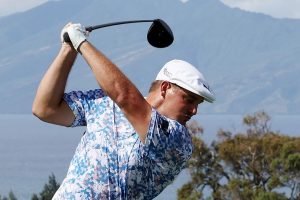 Bryson DeChambeau is continuing to blow people’s minds with his hulking figure seeing another monster drive.

The US Open champ was playing at the US PGA Tour Tournament of Champions and landed on the green of the 431-yard 12th from the tee, another huge drive that continues to show off his impressive physique.

DeChambeau spent about a year piling on 9kg of muscle in order to be better on the golf course.

DeChambeau looks like an NFL player on a day off.Source:Getty Images

But DeChambeau was hitting it further, becoming the longest driver on the PGA Tour in 2020 with an average driving distance of 337.8 yards and had the seventh longest drive of the year.

This 414 yard monster would have been the third longest drive of 2020 — and it’s just a week into the year.

While the monster wasn’t able to be turned into an eagle after he missed the putt, it once again got the golf world talking.

@b_dechambeau definitely has different gears. Will see how body holds up but I’m still intrigued on how this experiment will play out. Got himself a major with it.

He plays a game with which NONE of us are familiar.

DeChambeau started the day four off the pace after a first-round 4-under 69, and stayed there after day two following a 6-under 67, in a tie for 10th.

But don’t expect the long bombs to stop any time soon with DeChambeau putting the work in to get the tee shot as long as possible.

“I spent my off-season swinging my butt off as hard as I can. There were times where everything hurt in my body and it was breaking down my whole nervous system and rebuilding it back up,” DeChambeau told PGATour.com.

“There were numerous times where I was seeing a tunnel and I had to stop. I did not blackout, but I came very close, just like (long drive champion Kyle Berkshire) did.”

His focus on drives is paying off.Source:AFP

Harris English currently leads the tournament by two strokes at -14

The 31-year-old American made six birdies in a bogey-free round to stand on 14-under 132 after 36 holes on the par-73 Plantation course at Kapalua, Hawaii.

“I feel good about my game right now,” English said. “I felt like I played really solid. Just didn’t hole as many putts as I did in the first round. I drove the ball really well and hit a lot of greens in regulation.

“If I keep shooting six-under it’s going to be a good score at the end of the week.”