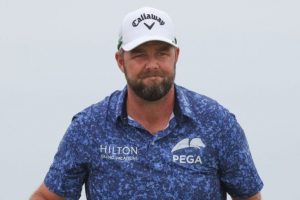 After Rory McIlroy revealed he wasn’t looking forward to this year’s Tokyo 2020 Olympics golf event, Mark Leishmann has more than reiterated its importance to the game of golf.

Leishman heads to Tokyo as one of Team Australia’s representatives at the event alongside fellow countryman, Cameron Smith whilst McIlroy will team up with former Open Champion Shane Lowry to form Team Ireland.

Despite an Olympic medal being one of the great honours in the world of sport, both have contrasting views on the importance of the event, with McIlroy less than enthusiastic about the chance to represent his nation in Tokyo.

Following his final round at last week’s Open Championship at Royal St. George’s McIlroy said: “I don’t know if there is much to look forward to [about the Olympics], It’s obviously going to be a very different environment.

He added: “Look, I’m not a very patriotic guy. I’m doing it because I think it’s the right thing to do.”

Despite McIlroy’s lack of excitement Australian, Leishman sees next week’s Olympic event at Kasumigaseki Country Club as a huge moment for himself and golf, and believes claiming the gold medal in Tokyo would top anything he had done so far in his golfing career.

He said: “If I was to win a gold medal I think it would rank above any other win I’ve had. Anything other than the British Open or the Masters, I think it’s going to be right there.”

Leishman will make his Olympic debut at this year’s Games after missing the previous event in Rio de Janeiro in 2016 due to the birth of his daughter.

Whilst the Australian was disappointed not to feature in the first Olympic golf event in 112 years, family was always going to take priority: “It was a pretty easy decision [not to go to Rio], but if it was a different set of circumstances I would have loved to have been there.

“I really would like this to be the second Olympics I’ve played at, but family comes first. I’m really excited about it now.”

The 37-year-old – who has six US PGA Tour titles under his belt – sees his participation in next week’s Olympics to be as important as a major tournament, and is therefore preparing for the event in a similar fashion to as he would for the four big week’s in the golfing calendar.

He said: “I’m preparing for it like I would prepare for a major, thinking of what I’m going to need and clubs I’m going to have to take.

Having two big tournaments back to back like the British Open and [the Olympics] makes it a little more difficult to prepare, but I feel like where I live is a good place to do that.”

Leishman heads over to Tokyo on the back of a tough week at the Open, after the Australian failed to make the cut in a frustrating two days at Royal St. George’s.

To make matters worse for the 37-year-old he was forced to play the final eight holes of his second, and final round without a putter after snapping the club on the 10th hole following a missed putt for birdie.

As a result, he will be looking to put any disappointment from Royal St. George’s behind him as he travels to Tokyo with the hope of clinching gold for his nation.