Home » Golf » ‘I would love to stick it to Tiger’: Scott’s Presidents Cup challenge

‘I would love to stick it to Tiger’: Scott’s Presidents Cup challenge

A tough-talking Adam Scott insists he would relish a chance to "stick it" to Tiger Woods in the Presidents Cup as defending Australian Open champion Abraham Ancer conceded he would be "nervous" in the same scenario.

World No.15 Scott has emerged as the unofficial leader of the International side, which has only ever won the Presidents Cup once, before playing captain Woods and his American contingent arrive in Australia next week. 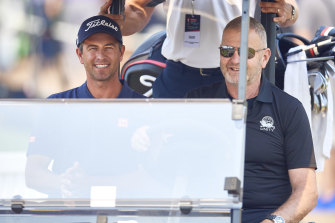 Adam Scott during a practice round for the Australian Open at The Australian Golf Club in Sydney on Tuesday.Credit:Getty

Only a couple of days after imploring Royal Melbourne crowds not to show vocal support for Woods and the United States team, Scott said he wouldn't be fazed if drawn against golf's most intimidating figure.

International captain Ernie Els, who will play in the Australian Open in Sydney this week, has jetted into the country and will round off Presidents Cup preparations during the chase for the Stonehaven Cup.

Asked about whether he wanted to play Woods, Scott said: "Of course, I would love to play Tiger and stick it to him.  I am definitely not asking for that. If that is Ernie's plan, then that's what I have to get myself up for. But we are moving on Ernie's orders here.

"I played Tiger in the Presidents Cup  – not in the singles – but I have played Tiger in matches before. You have to be ready for that. What I have seen is Ernie has planned this very precisely and strategically. He is taking the emotional side out of it."

Of course, I would love to play Tiger and stick it to him. I am definitely not asking for that.

Scott is the highest ranked player on the International team, and  such is the depth in the American contingent that, even without injured world No.1 Brooks Koepka, seven of their 12-strong team sit above Scott.

Hideki Matsuyama (world No.20) is the only other International player ranked above the United States' lowest, Matt Kuchar (23).

Ancer last month said he wanted to be drawn against Woods in the singles, which prompted a furious social media backlash.

This week at The Australian Golf Club he was more circumspect. 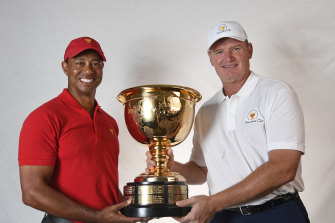 "I've got this question asked so many times and I've got a lot of grief for it," Ancer said. "Who wouldn't like to play against Tiger on a stage like that?

"I'll be really nervous if I do, but I think that experience will make me a better golfer down the line. It would be a cool experience, but I would never say that in a challenging way or a cocky way."

Woods and the rest of his American team will fly into Melbourne early next week after the 15-time major winner hosts the Hero World Challenge in the Bahamas.

It will be the first time Woods has played in Australia since 2011.

Ultimately if it was just down on paper the Americans are going to win.

"From an international angle it's difficult [coming up against Tiger]," Englishman Paul Casey said. "It's brilliant he's playing. It's not only the intimidation factor that it's Tiger, but he's playing brilliant golf.

"They are so much the favourites. It is ominous. I hope the Internationals win, that's what I really want. They can certainly win. Most of the guys here will be over the jetlag and most of the Americans will be in the Bahamas. There's little things.

"Ultimately, if it was just down on paper the Americans are going to win."

A trimmer Marc Leishman will play his first national championship since 2015 having lost eight kilograms after changing his diet following a disappointing second half of 2019.

"I've had a few back issues popping up," Leishman said. "I've lost, I think it's eight kilos, so not a whole lot of weight, but a good eight kilos in a suitcase, carry that around all the time, it makes a difference. It took a little bit of time for my body to adjust golf-wise, but I feel better."