‘Heroin was next’: Kenny Bontz’s recovery from pain-filled despair to golf dream

Kenny Bontz is taking drugs, 64,000 milligrams of them each day to numb the pain. To help him get out of bed? Twelve of them. He's drinking alcohol about the same time, a potentially deadly cocktail. Still the pain won't go away. 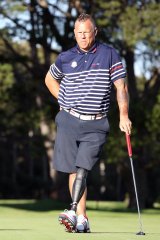 "Probably heroin," he says of those dark days. "I wouldn't have come back from that."

Instead he asked for the form, ticked the box and confirmed he wanted his leg cut off.

Today the tattooed, mohawk-sporting, sweet-talking American from New Jersey is standing at the top of the Australian Golf Club in Sydney. He has a tee behind his left ear. To understand how he got here, you have to go back to under-7s soccer training.

Bontz was diagnosed as a diabetic aged 11. By 19, he was told he had cancer in his tibia. He had chemotherapy and a donated cadaver bone placed in his lower left leg. He tried to lead a normal life and agreed to coach a kids' soccer team.

"A kid kicked me in the shin and broke my bone," Bontz says.

The surgery to fix it caused his leg to swell so much doctors needed to cut off the head of his tibia and femur and give him a whole knee replacement. In the next nine years, the pain was so bad Bontz had six surgeries. Each lasted between 13 and 18 hours. The more surgeries he had, the more pills he took to mask the pain.

Finally, the only way out was amputation. Either that or the really hard stuff.

"I was in such a dark hole," Bontz says. "I don't even think my family knew the hole I was in. My ex-wife did, but maybe not how deep it was. It was the easiest decision I could make.

I woke up in the recovery room and there was a diluted drip in my arm and I ripped it out. That's when my rehab started.

"I woke up in the recovery room and there was a diluted drip in my arm and I ripped it out. That's when my rehab started. The nurse came in and said, 'you've got to put that back in with the pain'. I said, 'no, I did this for a reason'.

On Tuesday, Bontz lived part of his dream.

He was having a practice round before this week's Australian All Abilities Championship, to be played alongside golf's Australian Open, when his playing partner stopped after nine holes. Bontz walked onto the first tee to play his second nine and bumped into a group featuring Australian veteran John Senden, whose son Jacob had been diagnosed with cancer. They connected over the first three holes because of the Big C. 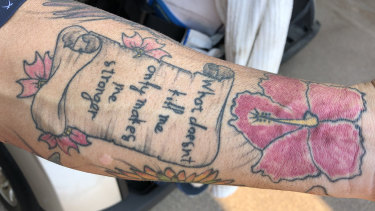 The tattoo on the inside of Kenny Bontz’s left forearm.

It got a little windy and Bontz got a little wobbly. When the wind is behind him, he's fine. When it's in his face, he's a little unbalanced on his prosthetic left leg. A problem? Not where he's come from. He just has to look at the phrase tattooed on his left arm: "What doesn't kill me only makes me stronger."

"I've been through so much and, at times, you think … life is going to end," says Bontz, who a couple of weeks ago attempted to become the first amputee to qualify for the PGA Champions Tour. "But it's just beginning. You can sit on the couch and let life pass you by if something like this happens.

"My goal was to make people frown every day in life. Now my goal is to make someone smile every day."