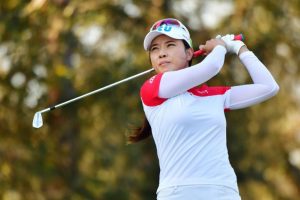 SINGAPORE – Intermittent showers may have brought a temporary respite from the scorching sun at Sentosa Golf Club, but the race for the HSBC Women’s World Championship title is beginning to heat up as Park In-bee was joined by compatriot Park Hee-young at the top of the leaderboard after the event’s second round on Friday (April 30).

Hee-young entered the 18th hole one shot behind In-bee, but the former posted her fifth birdie of the day to end on four-under 68 for a 133 total and draw level with the latter, who carded a 69.

Unlike the first round, which saw world No. 2 In-bee stay at the top for most of the day, the lead was exchanged several times among the reigning Olympic champion, Hee-young and Kim Hyo-joo on Friday.

The second day saw In-bee get off to a bumpy start at the New Tanjong Course when she bogeyed the third hole, but she turned things around with three consecutive birdies in the last three holes of the front nine.

But the likes of Hee-young and Kim, who is tied third with China’s Lin Xiyu after carding 68 in the second round, made it tough for In-bee, a two-time winner of the US$1.6 million (S$2.1 million) tournament.

Local player Amanda Tan, who received a sponsor’s invite, is last in the field of 69 golfers after she ended with a 76.