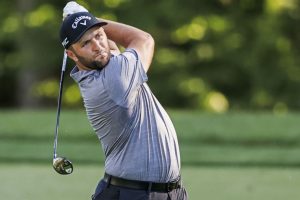 WASHINGTON (AFP) – Champion Jon Rahm aced the par-three 16th hole with an eight-iron from 183 yards on Saturday (June 5) morning and grabbed a two-stroke lead after the second round of the US PGA Memorial.

The world No. 3 from Spain was forced to finish his final five holes on Saturday morning after a Thursday storm delayed play and sunset struck on Friday with almost a third of the field unable to finish round two.

Rahm shared the lead with American Patrick Cantlay, who completed his second round on Friday on eight under, when he began Saturday morning but opened with a bogey at the par-four 14th, finding a bunker on his approach.

The 26-year-old Spaniard seized the lead alone with his hole-in-one at the par-three 16th, the third ace of his PGA career.

“Every hole-in-one is unexpected, but it was just one of those good numbers,” Rahm said.

“I just aimed between the pin and the edge of the bunker, hit a straight eight-iron and let the wind do the rest, and it went in.

“I did not think any ball landing short of the pin would go in just because it’s coming in with such height from the elevated tee and the greens are soft… early on, I was pretty sure that ball was going to be past the hole about 15 feet.”

Rahm followed with a birdie putt from just outside six feet at the par-four 17th and parred the last to complete a seven-under 65 and seize the lead on 10-under 134 after 36 holes.

“I’m in a good position. Yeah, I’m comfortable,” Rahm said. “I’ve been looking forward to it. I’ve been doing a lot of backdoor top 10s and I’m happy I’m in contention for once.”

Rahm has 10 top-10 finishes so far this season, including shares of fifth at the Masters and eighth at the PGA Championship, but his only top-four result was a runner-up effort last October at the Zozo Championship at Sherwood.

Rahm is chasing a sixth US PGA victory and his first since last August’s BMW Championship.

Cantlay (67), whose three US PGA Tour titles include the 2019 Memorial, was second on 136 with American Scottie Scheffler (71) matched for third on 138 on Saturday morning by compatriots Max Homa (69), Xander Schauffele (70) and 2020 PGA Championship winner Collin Morikawa (72).