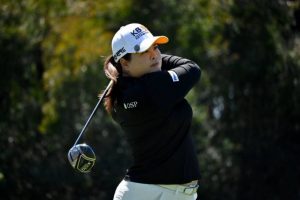 LOS ANGELES (AFP) – LPGA Hall of Famer Park In-bee of South Korea fired a three-under-par 69 and stretched her lead to five strokes after the third round of the LPGA Kia Classic on Saturday (March 27).

Park, a seven-time Major champion seeking her 21st career LPGA title, stood on 12-under 204 after 36 holes at Aviara, north of San Diego.

“Just trying to hit a lot of fairways and greens and hopefully the putts will fall.”

“I’m going to have to do something special to get it done,” Reid said.

“The game plan is to play aggressive and there’s nothing to lose. I’m going to try and get as close as I can to In-bee, but she’s an unbelievable golfer and she’s going to be hard to beat. She doesn’t make any mistakes.

“She’s one of the best players to ever play our game. You’re going to have to probably shoot six- or seven-under to even have a chance of winning.”

It is Park’s first event of the year as she prepares for next week’s ANA Inspiration, the LPGA’s first Major tournament of 2021, at Rancho Mirage, California.

“I’m really getting the good feel of it,” she said. “I played well last three days.”

The world No. 4 birdied the par-five fifth and par-four seventh and responded to a bogey at the par-three 11th with a birdie at the par-four 13th, hitting a nine-iron to 12 feet and sinking the putt.

“I was just going through that a little bit of a rough time, was going down a little bit,” she said.

“Then No. 13 birdie was a big turnaround and I was able to finish well after that.”

She added a five-foot birdie putt at the par-five 17th and got up and down for par at No. 18 on a day when four tees were moved up and the course played about 300 yards shorter than Friday.

“They made the course very reachable and I couldn’t take advantage of those holes, but I played the rest of the holes good, so I’m happy with that,” Park said.