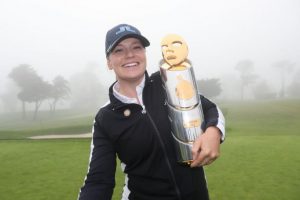 The 26-year-old Castren, a Finnish native who played at the collegiate level at Florida State, tied for her lowest round on Tour in her sixth career event. The Finland national team member became the first from her country to win an LPGA event with her 274 total for the four days (71-69-69-65).

“I knew one day it would be me,” said Castren, fighting back emotion after the triumph, “but you didn’t think it was going to be so soon.”

Castren blazed through the front nine, going six under – starting with three straight birdies, then an eagle on the par-5 No. 5 hole. She remained steady on the back, making eight straight pars and then clinching the victory with a birdie on 18.

Castren’s heroics were necessary to hold off Lee of Chinese Taipei, who carded a 69 on Sunday after entering the day with a two-stroke lead on the field.

Lee remained in contention, trailing Castren by a stroke until her bogey on the par-3 17. Lee birdied the 18th, but it proved too late.

Lee failed on her effort to become the first to win an LPGA event immediately following a Symetra Tour win in her previous start.

“I mean, winning a tournament you have to practice,” Lee said after her round, “and this is a great practice. Maybe after couple times I will be there.”

Australia’s Hannah Green (66) and South Korea’s Ryu So-Yeon (67) finished tied in third-place at 8 under. Second-round leader Danielle Kang (70), Jenny Coleman (70), South Korea’s Jenny Shin (70) were joined by France’s Celine Boutier, whose 64 on Sunday was the low round of the day, in a tie for fifth.

Lexi Thompson skidded to a 74 in her final round, ending her weekend in a tie for 34th place at 1 under.