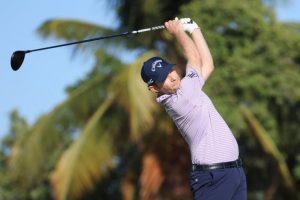 Grace, 32, finished at 19-under 269, just one stroke ahead of Venezuela’s Jhonattan Vegas, whose 65 matched the low round of the day.

“It was good, just being able to hit the shot that I needed Just played the right shot at the right time,” said Grace, who choked up in his post-round interview with the Golf Channel. “You know my old man passed away not too long ago, but he always said I’m an aggressive player and he was watching over me, and in the end it was enough.” Grace, who entered the week in the dreaded “bubble boy” position at No. 125 in FedEx Cup points, secured 300 points and a two-year PGA Tour exemption with the win – his first since the 2016 RBC Heritage.