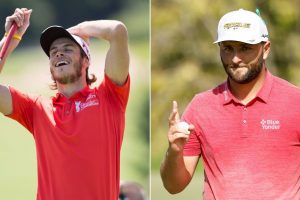 Jon Rahm has argued it “doesn’t seem fair” that Gareth Bale can be so good at both football and golf after he shared nine holes with the Welsh star at Torrey Pines. Rahm is in California for this week’s Farmers Insurance Open, with the in-form Spaniard gunning for his third PGA Tour win in as many starts.

The world No 3 has enjoyed a stellar start to the year, already winning the Sentry Tournament of Champions and American Express. And he’ll be heavily fancied to prevail again on the same course which saw him capture his sole major title at the 2021 US Open.

But he was given a test of a different kind on Tuesday, paired for nine holes in the Tuesday pro-am with Bale. Having announced his retirement from both club and international football this month, Wales’ record goalscorer has already confirmed his place at the prestigious Pebble Beach Pro-Am from February 2-5.

And according to Rahm, the former Real Madrid star won’t be out of place. Addressing the media afterwards, the Spaniard lauded Bale’s game: “I told Gareth you just can’t be so good at professional football and golf at the same time, it just doesn’t seem fair,” he said.

“You can’t be dedicated to one thing and still have this much talent for golf, it’s not fair in the slightest. But he’s looking to retire soon and he loves this sport and he loves golf. He really wants to play a little bit more and hopefully in the future I’ll see him more times in the Pro-Am.”

Admittedly, Rahm seemed oblivious to the fact Bale has already hung up his boots. But asked if he was sounded out for any special advice, the 28-year-old said it wasn’t necessary. In fact, he questioned Bale’s handicap being as high as two.

“He didn’t ask for anything, and nor should he be asking he’s good enough,” answered Rahm. “Like I said he has no business being that good when he’s a professional football player. The second he’s done and he can practice a lot more he’s gonna get a lot better.

“He got two strokes, which I think is already wrong. He should be giving strokes back to the rest of the amateurs because he’s already a very, very good player.”