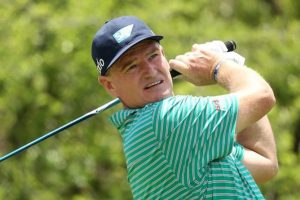 South African golf star Ernie Els has paid tribute to Gary Player’s wife Vivienne who died after losing her battle with pancreatic cancer on Wednesday. Golfing great Gary lost his wife after her year-long battle with the illness. The pair had been married for 64 years and had met at the age of 14.

Els paid his tributes to the Player family via social media, tweeting: “Sending my condolences to Gary Player on the passing of your beloved wife Vivienne.

“What a wonderful woman & what a wonderful life you shared together. My thoughts are with you my friend and of course the rest of your family at this sad time.”

As well as Els, a number of tributes flooded in from the biggest names in golf, including the current highest ranking South African Louis Osthuizen.

The 2010 Open champion tweeted: “My thoughts and prayers are with @garyplayer and his family today. My sincere condolences for your loss.”

European Ryder Cup captain in 2018 Thomas Bjorn also offered his condolences on Twitter, saying: “What sad news… An incredible woman. All my thoughts are with @garyplayer and the family at this time.”

Gary is regarded as one of the greatest golfers to grace the game, having won nine majors, 24 PGA Tour titles and 60 Sunshine Tour events.

As a result, the 85-year-old regularly recognised his wife Vivienne as a key component to his success, as she acted as both a nanny and a tutor for their six children whilst he travelled throughout his career.

Vivienne herself was also known to be a keen golfer, and once memorably made two hole in ones in the same round during a tournament in Johannesburg.

She was initially diagnosed with pancreatic cancer in June of last year and was said to be making steady progress.

Husband Gary released his own statement in tribute to his wife last night. He said: “The unthinkable has happened. My wife of 64 years, my childhood sweetheart, my rock and my soulmate Vivienne has lost her battle with pancreatic cancer.

“I cannot describe the deep sense of sadness I feel at having lost the one person who has always meant the world to me. Vivienne has been a constant in my life from the moment I first set eyes on her when I was 14.

“She fully supported my career and raised our six children almost single-handedly while I was touring the world playing golf. She was a devoted wife, mother, grandmother, great grandmother, and a wonderful human being that cared so deeply for others and lived her life in service to others.”

Player added: “Vivienne taught me the value of love, faith and trust. She taught our children those same values and they were blessed to have a mother who lived those values every single day.

“When we first met, I had no doubt that it was love at first sight and it turned out to be a love story of a lifetime. I believe it will also be so when we are finally together again.

“Until then, I will miss my Viv dearly.”