Home » Golf » Day’s back ‘feels good’ ahead of Masters, but Aussies off pace in Texas

Day’s back ‘feels good’ ahead of Masters, but Aussies off pace in Texas

Australia's hopes of adding a fifth golfer for next week's Masters appear over with Aaron Baddeley and Matt Jones well off the pace set by Si Woo Kim at the PGA Tour's Texas Open.

But the news isn't all bad for Australian fans, with Jason Day saying a week of rest and rehabilitation has his troublesome back "feeling good" as he gets set to start his Masters preparation at Augusta National. 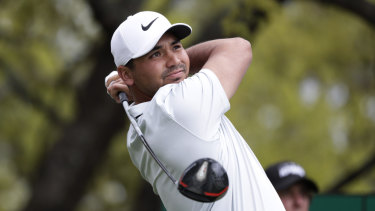 The former world No.1 will check in for his first practice round on Sunday (Monday AEST).

In San Antonio, South Korean Kim birdied the final hole to card a three-under 69 and got to 15 under, for a one-stroke lead heading into the final round on The Oaks Course.

Baddeley matched Kim's 69 to be best of the Australian contingent at six under and a share of 24th while Jones (74) slid back to five under and a tie for 40th.

Both must win the event to earn an invitation to the first major of the year and join countrymen Day, Marc Leishman, Cameron Smith and Adam Scott at Augusta.

World No.14 Day recently suffered a minor tear in a disc in his back which forced his withdrawal from the Arnold Palmer Invitational in early March.

The 31-year-old had multiple cortisone injections around his spine – which were effective – but pain and stiffness plagued him during a solid Players Championship campaign and a group stage elimination from the WGC-Match Play.

That early exit from the Match Play – an event he had won twice – proved a blessing in disguise as Day gained two extra days for rest and physiotherapy on his back.

"Yeah, the back is feeling good and I'm starting to get excited to get into Masters week and sharpen up," Day said.

"Thankfully, I've got a really good team back home [in Ohio] and it was a matter of being strict with my rehab and resting a lot.

"We did a lot of that and the back feels nice."

Day, who has previous second and third placings at the Masters, will take co-caddie Luke Reardon to Augusta this year after Rika Batibasaga carried the clubs for him at last year's Masters.

Reardon and Batibasaga share caddie duties on the US PGA Tour for childhood mate Day but this will be Reardon's first Masters as a caddie.