Creative Fowler back in form and ready for Presidents Cup

American Rickie Fowler believes he has the perfect game for Royal Melbourne's firm and fast greens ahead of the upcoming Presidents Cup.

Fowler, who was drafted into Tiger Woods' team to replace injured world No.1 Brooks Koepka, has spent some time away from golf after getting married and then enduring a bout of food poisoning. 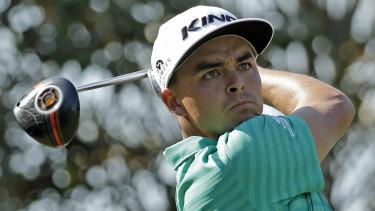 Rickie Fowler is looking forward to playing the greens at Royal Melbourne.Credit:AP

But the 30-year-old – who will turn 31 during the tournament – believes he is returning to prime form ahead of the Hero World Challenge in the Bahamas.

He and 10 of his Presidents Cup teammates will then charter a flight directly to Melbourne, where the USA will look to continue their dominance in the competition.

Fowler, a very different kind of player to the man he replaced in Koepka, may benefit from Royal Melbourne, which is a comparatively shorter golf course with difficult greens.

The five-time PGA Tour winner is known as a wizard around the greens, particularly his wedge game.

"I've loved all the trips I've had down to Melbourne, especially just the style of golf I love; that kind of hard, fast, links-style of golf, and Royal Melbourne is definitely a golf course you need to think your way around and position yourself to be able to get at certain pin locations the right way," Fowler told reporters on Tuesday.

"I'm just looking forward to it just because I feel like down there and that style of golf, it just allows to you use your creativity and shot-making so much."

Fowler married American track and field athlete and model Allison Stokke in October, before contracting a bacterial infection at the end of his honeymoon.

The illness forced him to pull out of the Mayakoba Golf Classic in Mexico, meaning Fowler didn't play golf for more than a month.

But the Oklahoma State product is confident of getting back to his best.

"I've been putting in some long hours. Been playing a lot. Putting a lot of really good work in."

"Ever since I got through that, it's been back to the grind, and I've actually been playing really well.

"I feel really good about the game and been able to get some great matches in with J.T. [Justin Thomas] and Tiger and Gary [Woodland] and some of the other guys in South Florida. We've been playing plenty of golf this last month or so."