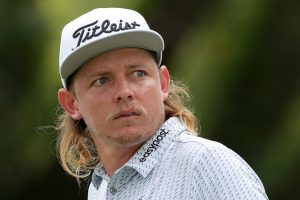 Australian Cameron Smith fired a career-low and course record 11-under par 60 to seize a share of the lead with Spain’s Jon Rahm after Saturday’s third round of the US PGA Tour Northern Trust tournament.

The 28-year-old from Brisbane shot a bogey-free 30 on both the front and back nines to equal top-ranked Rahm on 16-under par 197 after 54 holes at rain-softened Liberty National in suburban New York at the AUD$84 million FedEx Cup playoff event.

“The course is playing pretty soft,” Smith said. “I expect the boys will get up there. We’re all going to try our best.”

Rahm, the reigning US Open champion who missed the Tokyo Olympics due to Covid-19, grinded out level par on the back nine to shoot 67.

“I surely hope I don’t need to rely on something so unfortunate every time to have a big win,” Rahm said. “I’ve been able to look at the positive side of things and come back even stronger.

PGA officials postponed the final round from Sunday to Monday because of oncoming Hurricane Henri, which raised weather warnings across the region.

“It’s hard to back up a really good round, so maybe the day off will help me out,” Smith said.

Smith’s prior career low, like the old course record, had been 62. Four of the six players who shot 62 at Liberty National before Smith’s 60 did so this week, including Lowry and Canadian Corey Conners on Saturday.

A day after leaving Liberty National in frustration from a second-round 68, Smith made a career-high 11 birdies in the round.

“I guess that’s just golf. It’s such a weird game,” he said. “I left frustrated. I felt like I hit my driver everywhere and scrambled real well.

“I got here this morning and body felt a little bit different and ball striking was a whole lot better.”

Smith birdied five of the first six holes – his longest putt from 16 feet at the par-3 second – and he holed out from 31 feet at the par-4 ninth, then rolled in a nine-foot birdie putt at the 10th.

“It has been a bit of a rough trot with the driver of late. It has gotten away from me a little bit,” Smith said. “It was nice to see a lot of drives, a lot of good drives, today.”

“It was just a mis-read,” he said. “I can’t be too disappointed.” Smith’s only solo PGA title came at the 2020 Sony Open in Hawaii, although he twice won the Zurich Classic pairs event in New Orleans, most recently in April with compatriot Marc Leishman.