Augusta, Georgia: The King was dead. Long live the King.

Tiger Woods won the Masters. Eighteen months ago it was inconceivable. A year ago it was highly improbable.

When he finished sixth in the British Open and second in the US PGA last year before winning the Tour Championship six months ago, it was possible. 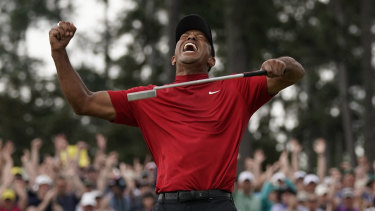 Today, it is a reality. He has a fifth Green Jacket, 22 years after winning his first and 14 years since his last one.

In the space between, there’s been generational change.

When he won back then he beat the likes of Greg Norman, Nick Faldo, Nick Price, Jose Maria Olazabal.

Today he beat men who were kids back then. Kids he inspired like Rory McIlroy, Dustin Johnson, Jordan Spieth.

They saw what Tiger did as a kid on Tour and wanted to be like him. They saw him eat up seasoned pros the world over as he strung together 14 majors among dozens and dozens of wins.

Today they got to see what it was like first hand to take on Tiger at his best. 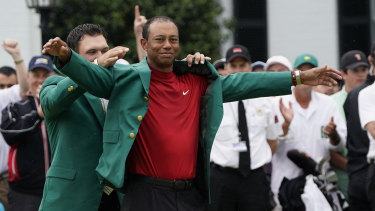 He stares you down and takes you out.

They have all spoken about how “cool” it was to play with Tiger as he returned on tour. Like it was a novelty.

It’s no longer a novelty. Tiger Woods is back winning majors and, with 15, the quest to emulate Jack Nicklaus’s fabled mark of 18 is alive.

That quest had no heartbeat when he could hardly walk in 2017. Today it is adrenaline-charged.

The next two majors are at courses Tiger has won the US Open on.

Today’s victory was a testament to the new Tiger who will be suited to those courses.

Today’s victory is it is the very first of his 15 major wins in which he came from behind on the last day.

In all 14 other wins he has been leader or equal leader after day 3.

In the past, when he chased, he chased too hard and came up short. Every time.

Today it was steady as she goes. He didn’t chase, he out-thought and outlasted.

Francisco Molinari looked like a rock. He went 50 holes without a bogey. He was 20 for 20 for the tournament getting up and down.

But it all fell to pieces on the back nine.

It started at the 12th, the deadly 155-yard par three over Rae’s Creek at Amen Corner.

In the group before, Brooks Koepka, who was tied second with Woods, and Ian Poulter both dunked their nine-irons into the water.

The immovable object that was Molinari did the same. So did Tony Finau who was still in it at ten under.

Four players from the last two groupings in the water.

Woods stood over his nine iron and plonked it centre green and walked away with par. Molinari, Koepka and Poulter had double bogeys and Finau bogey.

Wood and Molinari were tied at 11 under. Challengers came and went.

The leaders then birdied 13 and had pars on 14. One the par five fifteenth, Wood was on in two while Molinari laid up. He put his wedge into the water after clipping trees.

It was all over.