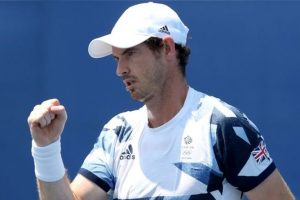 Andy Murray shows off his room in Tokyo Olympic village

Tennis star Andy Murray has proposed the idea of a mixed gender golf event, combining the Ryder Cup and Solheim Cup as one. The two-time Wimbledon winner offered the idea out to his followers on Twitter, just hours after Team GB secured two gold medals in two mixed events, the4x100m medley relay and the triathlon relay.

Murray believes that sport is ‘missing a trick’ by not including more mixed events, beginning the conversation on his Twitter account by tweeting: “How good are mixed events in sport? They are a huge asset and so many sports miss a trick not supporting/promoting them more.”

Murray himself has competed in a mixed event for Team GB at an Olympic Games, after he clinched the mixed doubles silver medal on home soil at the 2012 event in London alongside fellow Brit Laura Robson.

However, the 34-year-old has now revealed he would love to see the idea implemented into one of the world’s biggest golf events by integrating both the Ryder Cup and Solheim Cup, where the best golfers from Europe and the USA face off every two years.

The two-time Olympic gold medalist opened the idea up to his followers in a Twitter poll saying: “Who else would love to see a mixed golfing event Ryder/Solheim cup style? I think it would be brilliant for the sport.”

JUST IN: Why is Rory McIlroy competing for Ireland and not Team GB in golf at Tokyo 2020 Olympics?

As a result, his proposal received support instantly, as over 6,000 people cast a vote inside 30 minutes with 83% agreeing with Murray’s mixed golfing idea.

Both the Solheim Cup and Ryder Cup are just around the corner in the golfing calendar, with the former kicking off on August 31st at the Inverness Club in Ohio, and the latter beginning just under a month later at Wisconsin’s Whistling Straits on September 24th.

Whilst Murray outlined many sports are ‘missing a trick’ not implementing mixed events, golf itself has already executed the idea just this week, with the European Tour and LPGA Tour combining to hold a mixed tournament in the shape of the ISPS Handa World Invitational in Northern Ireland.

Both men and women will compete alongside each other across two separate courses in Northern Ireland, with both sides of the tournament competing for the same amount of prize money.

The event will count towards the European Tour’s Race to Dubai standings, with Team Europe, Ryder Cup qualifying points also up for grabs for the field.

New Zealand’s Daniel Hiller leads the men’s side of the tournament at the halfway stage at 11-under-par, whilst American Talley heads up the female leaderboard on 13-under.