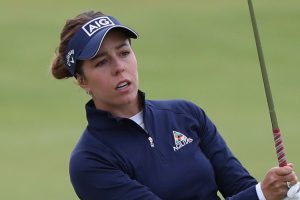 Georgia Hall insisted she would be happy for the wind to pick up as she heads into the weekend of the AIG Women’s Open in a share of the lead.

Hall could have been two clear had she not blighted a six-birdie card with a double-bogey six at the 15th, although she was delighted to negotiate the treacherous final three holes in pars for a 69 that hauled her level with Mina Harigae on seven under par.

Ireland’s Leona Maguire enhanced her claims for a Solheim Cup place as a superb, bogey-free 67 lifted her to five under, alongside Lexi Thompson and one ahead of world No 1 Nelly Korda, who struggled to a 73 despite the relatively benign conditions on day two.

Defending champion Sophia Popov missed the cut, along with the likes of Charley Hull, Mel Reid, Jodi Ewart Shadoff and Danielle Kang, but Dame Laura Davies upstaged her English compatriots as she made six birdies in a 70 which got her into the weekend with plenty to spare on level par – an outstanding achievement at the age of 57. Davies is just seven strokes adrift of a confident Hall, who looked very much like the player who captured the title at Royal Lytham three years ago, her love of links golf clearly evident as she laid out her wishlist for the weekend weather at Carnoustie.

“I think it’s about time it got windy,” she declared. “It’s proper links golf, that’s what people want to see and I think it makes golf much more interesting when there’s a lot of wind. So I’m quite excited to play in it. Obviously it makes it a lot harder but I think it will be a true test.

“The pins were a little bit harder today, they were tucked more behind some bunkers which was tricky, but I managed to make the most of it and I was very happy with my last three holes, especially after the double.

“Coming off a double with three of the hardest holes on the course to play I had to forget about it. I felt I didn’t even play too bad on that hole, but it’s so easy to make a double on this course. I was just focused on hitting a good tee shot on 16 and then going from there.”

Harigae made light of the difficulty of the closing stretch at Carnoustie as the American birdied four of the last seven holes in her 67, while Lizette Salas carded back-to-back 69s to earn a share of third with overnight-leader Sei Young Kim (71).

Thompson got to seven under with her fourth birdie of the round at the 12th before slipping back with bogeys at 14 and 16, while Nelly Korda and Madelene Sagstrom both followed up their opening 67s with error-strewn 73s as the temperature dropped late in the afternoon. 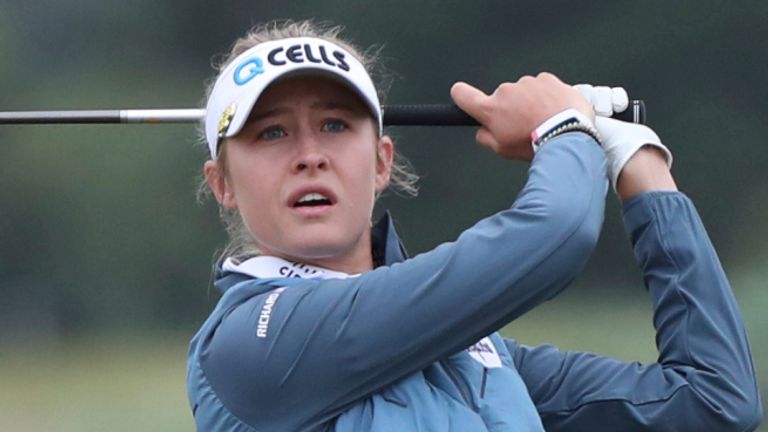 Korda admitted she was having trouble on the greens over the first two rounds, although she was happy to be only three shots off the pace despite not having her “A game” thus far.

“I wasn’t putting well, the putts weren’t dropping,” she said. “The afternoon the greens got bumpy, and I got on the wrong side of those bumps. So they were constantly missing, but that’s golf.

“Everyone keeps talking about how I’m playing so well, but I’m going to shoot bad scores. I’m human. So just a little punch of reality that I’m human, and I’m going to continue working these next two days and see how it goes. 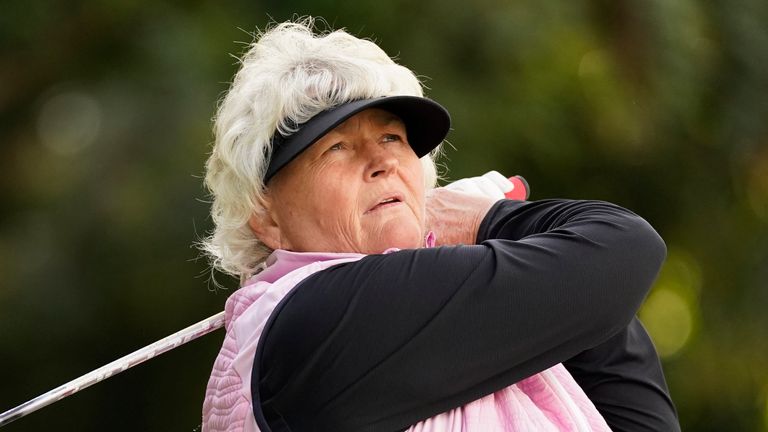 “I don’t think I hit it that bad. The only thing I struggled on was making those putts and getting it close. I was on the greens but still had 20-footers, and it was kind of hard.

“It’s definitely important to keep yourself in it when you don’t have your A game.”

Hall’s playing partner Louise Duncan had hit the headlines after her opening 68, but the Scottish amateur endured a rollercoaster second round as she mixed five birdies with six bogeys in a colourful 73 which takes her to the weekend on three under par.