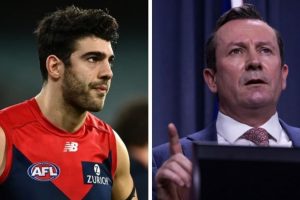 Western Australian Premier Mark McGowan says the AFL Grand Final could only be taken to Perth under “very strict guidelines”, which would include barring families of players and coaches from entering the state.

McGowan said his Government was currently in talks with the AFL about playing the biggest game of the season at Perth’s Optus Stadium.

With Victoria and NSW both in the grips of Covid-19 outbreaks, and South Australia and Queensland only recently flattening their community transmission curves, the AFL’s options appear limited if it hopes to welcome capacity crowds to the grand final on September 25.

Given Western Australia’s stable Covid-19 situation and strong association with Australian rules football, it looms as the most logical destination for the decider.

However, McGowan said the game’s relocation to Perth was far from a done deal.

“That hasn’t been achieved at this point of time, but obviously we’re working with the AFL on very strict guidelines around all these issues and I don’t think the AFL has made that decision yet,” McGowan said.

As part of those guidelines, McGowan suggested that only essential personnel would be permitted entry into the state for the game and said families of players and coaches would not make the cut.

“Our intention is that those sorts of groups wouldn’t be permitted to join players coming in. It’d be a very strict and tight regime,” he said.

McGowan was coy on whether vaccines would be mandated for players on the two teams contesting the AFL Grand Final if it were to be held in Perth.

“They’re decisions that we’ll have to work on with the chief health officer,” he said.

“I would expect most footballers, in fact probably all, are already vaccinated. I certainly would’ve thought that would be a wise decision by the AFL.”

2021 could be just the second year in AFL/VFL history the grand final has taken place outside of Victoria. Picture: Paul Kane / Getty ImagesSource:Getty Images

As other states have reported surges in locally acquired Covid-19 cases this season, Optus Stadium has continued to host games. However, Western Australia imposes the tightest restrictions on visiting teams of any state.

The AFL was forced to amend its fixture on the most recent occasion an interstate team played at Optus Stadium, pushing the game back to Monday so the Melbourne Demons had enough time to complete quarantine before the clash.

With only one round of the regular season to play, it appears unlikely that either of Western Australia’s clubs will qualify for the finals, and if one side did, it would be at extremely long odds to make it to the big dance.

The AFL therefore needs to plan for the scenario that both grand finalists would be coming from interstate.

As it looks to complete its season as soon as possible, the AFL announced on Monday the pre-finals bye had been scrapped for the first time since its introduction in 2016.

The AFL’s EGM of clubs and broadcasting, Travis Auld, confirmed on Monday there would be no pre-finals bye in season 2021. Picture: Michael Willson / AFL Photos via Getty ImagesSource:Getty Images

“As we continue to navigate such uncertain times and the challenges associated with delivering matches across multiple states, we want to ensure the momentum of the season isn’t compromised in the lead up to the 2021 Finals Series,” said AFL executive general manager of clubs and broadcasting Travis Auld.

“We will approach the finals as we have the last 18 months, and that is to remain flexible and agile while monitoring an evolving set of circumstances in front of the competition.

“Our game is not immune to the uncertainty and the challenges in the wider community. We have had to make decisions all year to mitigate risk to keep the season going and now to ensure we deliver fans an epic and memorable month of AFL Finals.

“If circumstances require in the lead up to the 2021 Toyota AFL Grand Final, then we have the ability to pause for a week, ensuring we deliver on our commitment to provide the two competing clubs, their members and fans, the biggest and best sporting event of the year.”