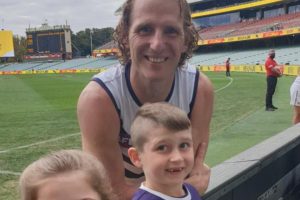 David Mundy has been hiding in plain sight for 17 years.

The unassuming Fremantle star is skyrocketing in the battle for the made-up mantle of Australia’s favourite footballer.

A 35-year-old miracle of modern science has a genuine claim to being the best player in the AFL this season.

He sits on top of the coaches association’s Champion Player leaderboard with 38 votes on the back of huge performances in the Dockers’ three-game winning streak.

He had three goals to go with 30 disposals against North Melbourne over the weekend after he was the best on ground – with nine disposals and a clutch goal in the final quarter – when Fremantle won a thriller against Adelaide in Round 5.

This year he has been turning heads — on and off the field.

Far more than suddenly discovering a fountain of youth that has seen him return to his dominant best from 10 years ago, Mundy is a popular champion that is so much more than the numbers on his stats sheet or whatever his SuperCoach score says.

It’s why Dockers coach Justin Longmuir earlier this month said Mundy’s standing in the game isn’t fairly recognised as a result of playing his entire career in Perth — away from Melbourne’s footy fish bowl.

“Our supporters understand he has been a very good player for a long period of time and the rest of the competition is catching up now,” Longmuir said.

“He is a wise, calm head. When things are moving quickly, he is able to steady us and move at a slower pace.

“The way he is invested off the field in our young players in what we are trying to do, he has been like a second coach and mentor for them.

“I’m proud he has been able to perform the way he does on the field because that just complements what he is doing off the field. He is a leader in the true sense.

His quality as an ambassador for the sport has never been questioned — and it was best shown in the game against the Crows when his random act of kindness was highlighted by a viral tweet sent to Fremantle’s official Twitter account that showed his classy interaction with a Crows supporter.

“We saw him at the fence and our son wanted to but couldn’t make himself go say hello as he was so nervous and scared and really struggles with social skills,” the supporter wrote.

“My husband went over and asked if he could wave to him.

“Mundy gave him a thumbs-up and Lucas was so happy and waving and then Mundy waved him to come down and he could not get down the stairs quick enough.

“Not that he knew but our son has Autism and this just made his day, so thank you so very much!”

His football credentials should not be minimised by his off-field class either.

He’s just surpassed club legend Matthew Pavlich’s record wth the most wins of any Fremantle player — and he is also on track to pass Pavlich’s club record of 353 games for the club at the end of the 2021 season.

His form this season has seen bookmakers slash his odds to win the Brownlow medal.

Plunging from $500 to as little as $19 with some betting agencies.

His success even this late in his career is a refreshing narrative change. In a footy industry now dominated by high performance systems and computer data, Mundy is just a bloody good footballer.

“I’ve always been a footballer first and an athlete a distant second, he told Fox Footy’s AFL 360 this week.

As early as 2009, Mundy says he can remember struggling with his aerobic capacity to run out games.

However, the latest rule changes have brought the game right back to where he likes it.

Mundy agreed in the live interview on AFL 360 that the game has opened up this season, increasing the value of having silky ball-users — like him — on teams.

“It’s something I’ve always focused on as one of my absolute strengths,” he said.

“Even now going into games it’s something I focus on and try to maximise. It’s quite hard to get it so when I do I want to make the most of it.”

David Mundy of the Fremantle Dockers and his wife Sally.Source:AAP

The only time he tightens up in the interview is when asked if his stellar form will push him into a ridiculous 19th season — that would see him sign a one-year contract extension through to the end of the 2022 season.

He still hasn’t given up the dream of one more tilt at a premiership — despite Fremantle going through a rebuilding phase.

Perhaps even 2023 is not beyond him — as shown by 38-year-old Hawthorn legend Shaun Burgoyne who is set to reach the 400 game milestone in his final season this year.

So at the end of it all, what is the secret to playing 18 years as a star in a professional league where less than a third of players ever reach the 50-game milestone.

“A little bit of luck goes into it. I’ve avoided major injuries throughout my career, mostly,” he said.

“An unhealthy dose of competitiveness. I lost a goalkicking contest with Josh Treacy yesterday and I’m still filthy about it.”