Home » Tigers bite back to knock Dogs off their perch

Tigers bite back to knock Dogs off their perch 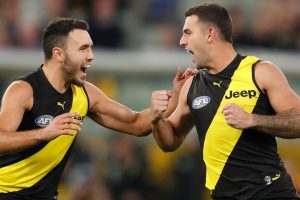 If the previously-unbeaten Western Bulldogs thought they were premiership material in season 2021, they received a brutal reminder from reigning champions Richmond on Friday night that they’re going to have their work cut out for themselves to stop a yellow-and-black three-peat.

After being humbled by another rising challenger in Melbourne last week, the injury-hit Tigers fought back from 25 points down to register their most significant win of the season and end the Dogs’ undefeated start to the year in the process.

Richmond looked vulnerable heading into the contest, missing Dustin Martin (concussion), Dion Prestia (calf), Kane Lambert (calf) and Nick Vlastuin (knee), but they reminded the competition that they’re not done yet with a stirring 22-point victory against the AFL’s hottest team.

After being outplayed for much of the first half, the Tigers fittingly engaged premiership mode in the premiership quarter as they completely overwhelmed the Bulldogs’ vaunted midfield and their backline could not cope with the inundation of forward entries.

Richmond helped themselves to the first 16 inside 50s of the third term and kicked five goals in a row at one stage, to dramatically transform the complexion of the game. They finished up with 10 of the last 12 majors.

The Tigers’ midfielders were winning the clearances at will and gave their team first use of the ball up forward, besieging the Bulldogs defence which committed countless panicked disposals and kept kicking it straight back to their opponents. The Dogs didn’t enter their forward line after halftime until the 22-minute mark of the third term.

The Bulldogs’ spirit was finally broken late in the last quarter as Shai Bolton, one of the architects of the impressive comeback, sold some candy to Easton Wood before kicking a banana straight through the middle.

After missing his first five shots on goal for the game, Tom Lynch looked like he was headed for a dirty night at the office. His confidence looked totally shot when, in the shadows of quarter-time, after marking strongly from close range, he decided to handball it to Jake Aarts who had to dodge a defender in the goalsquare before kicking truly. But the former Sun turned things around dramatically to lead the charge up forward and finish up with 14 disposals, 12 marks (four contested), 11 score involvements and three goals.

The Bulldogs’ defence has been earmarked by many as potentially the one chink in the ladder leaders’ armour, and after being placed under enormous stress after quarter-time, those calls seemed justified. Everything looked hunky dory midway through the second term as the Bulldogs’ midfield dominated proceedings up to that point, but once the Tigers really ramped up the pressure with a comprehensive advantage in territory battle, the Dogs backline wilted under the heat of repeat Tiger entries. After trailing the inside 50s 22-10 early in the second term, Richmond won the count 47-21 from that point.

CAPTAIN COTCHIN HAS A CRACKER

Trent Cotchin led from the front in the third quarter with nine disposals to play a pivotal role in the stunning Richmond turnaround. Conversely, star Bulldogs pair Jack Macrae and Tom Liberatore could only manage five touches between them in that period after racking up a combined 32 in the first half.

Patrick Lipinski had the chance to level the scores midway through the final term, but his running shot on goal from 40m out on a tight angle hit the post. Three minutes later, Bachar Houli unloaded a set shot from 50m out that fell short, but inexplicably bounced through for a goal despite the fact that Bulldogs defenders Bailey Dale, Alex Keath, Zaine Cordy and Jason Johannisen were all in the goalsquare.