The secret to West Coast’s success 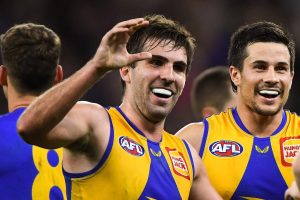 Teams have to kick goals to win games of AFL, and West Coast is generally recognised as being the best in the competition at doing it.

And coach Adam Simpson said that a lot of training and not limiting the number of shots on goals players can take because of sports science theories, was behind the side’s success.

The Eagles’ return this season of 175.122 from their 13 games shows off an accuracy that would have other teams envious.

They trailed Richmond by four points at halftime on Sunday night, with 7.1 on the board. Then, a Josh Kennedy sharp shot from the boundary with 36 seconds left on the clock sealed their remarkable four-point victory.

Richmond coach Damien Hardwick was full of praise for the Eagles’ skills after the loss.

“They are just wonderful set shots,” he said.

“They kicked one goal from general play and the rest were from set shots.

“They kicked eight goals from outside 40m. Their goal kicking is amazing and always has been. They manage to kick their goals.”

Of the teams in the top eight, West Coast has the best conversion rate, with almost 59 per cent of their scoring shots being goals.

Port Adelaide is the next best in making the most of their chances, with 155.118 at almost 57 per cent.

Simpson said he had talented players who worked hard.

“We train it a lot. We try and get shots from good spots, and then we’ve got good players,” he said.

“The old school people are saying sports science. That’s rubbish. We can kick as much as we want and have for years, so don’t let anyone say that.

“Our boys can have as many kicks as they like and that’s been for eight years, so don’t buy into that stuff.

“Coming in on your day off to do goalkicking, that probably doesn’t happen. But we put it in our program and the forwards value it.”

Simpson said that Kennedy is the most prepared in that space.

He continues to show that he can kick them from outside 50m and from tight angles.

“Our race to go inside at (training venue) Mineral Resources Park is right where JK kicked that goal (to win the game against the Tigers),” Simpson said.

“So of any spot on the ground, that’s probably the spot he would like to take it.”

Because the AFL moved the Round 14 fixture between the Eagles and the Tigers to Sunday night, West Coast now has a bye.

The fixture change has worked well for the Eagles, who can freshen up before they host the Western Bulldogs in Round 15.

In the mix to return from injury for West Coast are Brad Sheppard, Jack Petruccelle and Jeremy McGovern. Luke Shuey will play in the WAFL next weekend, so is also close to a recall.

“We need a break,” Simpson said.

“Our players need a break, and our coaching and footy department need a break. We’ll embrace the next three to four days we have off and reload for the Bulldogs.

“On reflection the break has been perfectly timed.

“Richmond has been on the road for three weeks. They’ve had two travel games from Sydney, and both of us were looking like we needed the bye. We’ll put it in perspective, but it was an important win for us.”

No regrets for Richmond

Despite losing to West Coast in a thriller at Optus Stadium on Sunday night, Richmond coach Damien Hardwick maintains the AFL did the right thing in bringing the clash forward a week.

The Eagles came back from 22 points down midway through the final term to beat Richmond by four points in the dying seconds.

The game was supposed to be played on Thursday night to kick off Round 14.

With Richmond set up in Sydney, unable to return to Melbourne because of a Covid-19 outbreak, the AFL worked with both clubs to bring the clash forward.

A cracking crowd of 50,834 showed up to watch the clash despite the unusual 5:20pm Sunday afternoon timeslot.

A late Josh Kennedy goal denied Richmond from notching a third consecutive victory for the first time this season.

The game was a great success for the Eagles and the AFL and even after losing the clash, Hardwick has no issue with the moving of the fixture.

“No question. We were always going to play here. For us, it was a positive; we didn’t have to quarantine,” he said.

“It was brave by the AFL and I commend them for doing it. It was a smart decision.

“I think our guys will look at it as a general positive. We came together, travelled well. For us it was positive from that point of view.

“We are fortunate we got to play in front of a crowd; our players love it. It’s a great stadium, the environment is phenomenal … it’s a pleasure to play here.”

Richmond flew back to Melbourne on Sunday night, having last played in their home state in Round 9 when they beat Greater Western Sydney by four points at Marvel Stadium.

The loss to West Coast hurt. The Tigers remained in eighth place, but are just one win ahead of ninth-placed Fremantle and one win and percentage from fourth-placed Brisbane. However, they have played one game more than the Lions.

The Tigers will have a bye in Round 14, then face three games they would be expected to win, against St Kilda, the Gold Coast and Collingwood.

“We’re in the hunt. We’re like a lot of sides, spluttering along at the moment,” Hardwick said.

“We get some players back, then we lose some players. There are sides, I wouldn’t say having a charmed run, but are coping well with their injuries.

“Then there are sides like us that are battling along the way and waiting until we get our side back together and start to gel.

“We probably haven ‘t hit that run of form as yet. Hopefully it comes after bye.”

Among the players Hardwick is waiting on to return are key forward Tom Lynch and ruckman Toby Nankervis.

In Lynch’s absence, youngster Callum Coleman-Jones has stepped up, kicking 8.2 from three games.

Hardwick said after the loss to West Coast that there is definitely room in the side’s forward line for him, Lynch and Jack Riewoldt.

“I think so. They (Coleman-Jones and Lynch) are both wonderful players,” he said.

“Lynch has been around a long time and CJ is just learning his craft. I hope they can play in the same side.

“We just need to change something to make sure it works.”