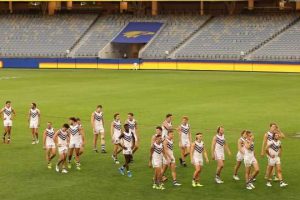 Fremantle have been forced to hit the road as COVID concerns in Perth play havoc with the AFL fixture.

The league confirmed on Tuesday that a Round 8 clash against the Brisbane Lions scheduled for Optus Stadium will be relocated to the Gabba in Brisbane.

As a trade-off, their Round 21 match-up in Brisbane will switched to Optus Stadium.

The Dockers will travel to Queensland on Wednesday, May 5 and be based on the Gold Coast before travelling to Melbourne for their Round Nine match against Essendon at Marvel Stadium on Sunday, May 16.

That puts them on the road for two full weeks amid ongoing concerns with the situation in WA.

West Coast are still scheduled to play Hawthorn at the MCG on Sunday, with no changes yet to their Round 9 clash against Adelaide, which is due to be played in Perth.

The AFL said it is “working closely with both Western Australian-based teams” and any decision made would be in consultation with respective State Governments to”minimise any potential disruption and risk for both the clubs and the broader competition”.

“The current COVID-19 situation in WA doesn’t yet allow for the certainty of crowds in attendance at Optus Stadium this weekend,” Garlick said.

“For two consecutive weeks we have played with no supporters in the stands and this fixture swap gives us the best chance to play in front of our faithful members and fans in full voice later in the season.

“There is the risk that more community cases occur in the coming days, which could impact Brisbane entering or leaving WA, along with our ability to travel interstate

AFL Football Operations boss Steve Hocking said the health and safety of everyone remains paramount and the league would continue to take the advice of governments and health officials.

“The health and safety of everyone in the game and the wider community remains the priority as we continue to navigate the pandemic,” Mr Hocking said.

“Our competition will continue to remain adaptable as we navigate the 2021 Toyota AFL Premiership Season and the AFL thanks both clubs, players and the AFLPA, venues, governments, and supporters for their understanding.”