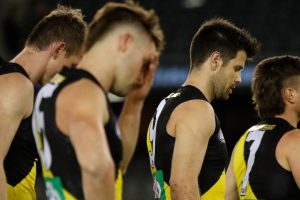 The AFL has revealed the 40-man All-Australian squad for the 2021 season.

Each season, 40 of the most outstanding players of the season are nominated for inclusion in the 22-man All-Australian squad, which will be announced on August 26 this year.

Since 2007, the extended squad has not segregated players into specific positions, but rather features just the 40 players deemed to have performed most strongly across the home-and-away season.

A total of 21 players included in this year’s 40-man squad have not been picked in the All-Australian team before, while seven players from last year’s best 22 were included in the squad for 2021.

Lance Franklin is among those picked, putting him in contention to earn a record ninth All-Australian blazer.

Seven of the 40 players selected are on the books at the Melbourne Demons, while five play for the Brisbane Lions. All but three clubs have at least one player in the squad, with only North Melbourne, Collingwood and, incredibly, last year’s premiers the Richmond Tigers, missing out.

The omission means 2021 will be the first year since 2013 that the Tigers have no players in the All-Australian team.

The 2021 40-man All-Australian squad (in alphabetical order) is: