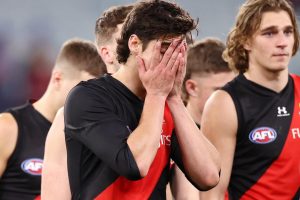 A second Essendon player has been forced into immediate isolation away from the club’s Queensland hub.

Irishman Cian McBride attended the Wallabies vs. France rugby match in Melbourne but was able to train with teammates as he was regarded as a tier 3 contact.

However, the Bombers decided they would not take any chances with the 20-year-old, promptly sending McBride into isolation before he was ultimately reclassified as a tier 2 contact on Monday.

Much like his teammate Andrew McGrath, McBride’s 14-day quarantine is backdated from when he was at AAMI Park on July 13, so he is already more than a week into his isolation period.

Essendon’s quarantine news comes as the AFL confirmed its fixture list for round 19.

The league finalised details for the clash between Geelong and Richmond as well as Essendon’s match against the GWS Giants.

Geelong and Richmond will face off in a battle of the feline mascots at the MCG on Sunday, with the first bounce at 3.20pm (AEST).

Essendon and GWS, both in their respective Queensland hubs, will play at Metricon Stadium on Sunday at 6.10pm (AEST).

AFL executive general manager clubs and broadcasting Travis Auld was full of praise for both the clubs and venues for doing their part in keeping the season alive.

“We thank the four clubs, broadcast partners and venues – the MCG and Metricon Stadium – for their understanding as we finalised details for the respective matches to be played on Sunday,” Auld said.

“As we continue to navigate the challenges presented, we would like to thank all state and territory governments, the clubs, players, coaches, umpires, staff, AFLPA, broadcast partners and all the families for their continued patience and support.”

The finalised fixtures came after a whirlwind Tuesday when the Adelaide Crows and Port Adelaide were in a constant state of limbo in terms of travel arrangements.

The AFL scrambled to get both clubs into Victoria after the South Australian government announced the state would go into a snap lockdown that would not allow the clubs to train.

However, when the clubs got to the airport on Tuesday afternoon, they were turned back and told to go home.

The clubs eventually ended up in Victoria, temporarily setting up shop in the state’s capital ahead of this weekend’s fixtures.

The Power will face Collingwood in Travis Boak’s 300th game at Marvel Stadium on Friday, while the Crows take on Hawthorn at the same ground on Saturday night.

Speaking ahead of the milestone occasion, Boak believed there was only one way to react to the wild scenario side faced on Tuesday.

“I’m laughing under this mask because that’s about all you can do at the moment,” Boak said.

“It was some sort of rollercoaster day when we found out we were going to Melbourne, then told to cancel plans and to stay put, but then it was back on again.

“It was a pretty emotional day, a challenging day, there’s no doubt about that, but we’re here in Melbourne now settling.

“I’m just so grateful to play for this footy club for one game, let alone 300.

“I would have loved to have played in front of our fans and my family, but circumstances are that we can’t, but I’m still very grateful to be running out there on Friday night.”