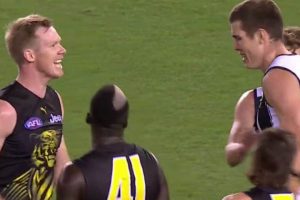 Collingwood Magpies forward Mason Cox has come out swinging on Twitter after a relatively heated pre-season match against the Richmond Tigers on Friday night.

Cox was in the thick of the action and it meant the Tigers were all over him throughout the match.

While the result meant little as it’s just a pre-season clash and the final hit out before the season began, no one told Cox or the Richmond players he had a running battle with all night.

And Cox took to Twitter to continue the battle.

For those asking. In the third quarter a Richmond waterboy decided to get lippy.

I took that personally and returned the favour.

It appeared to really heat up just before the end of the third quarter when Mabior Chol gave away a free kick when he gave the Magpie a small push in the back.

Cox then kicked his second goal of the game with 33 seconds left but he made special notice to get up in Chol’s face and give him a bump.

It was Mason Cox vs Richmond.Source:Getty Images

But the rest of the Tigers, led by Dustin Martin and Jack Riewoldt from the other end of the field got into some pushing and shoving.

”You don’t often see this in the practice matches,” Jonathan Brown said in commentary.

“He ran into Chol right after he kicked the goal,” Garry Lyon added. “He got very lippy as he tends to do.”

While there were plenty of players joining in, Cox clearly took exception to Riewoldt.

It started when Martin bumped into him, when Riewoldt showed up, but the feeling wasn’t done as the Tigers got the ball going straight up the other end.

While he wasn’t involved in the play, Cox was on the mark and let Riewoldt know about it.

Riewoldt missed the kick but it didn’t stop the chatter in the middle as pair went at it.

While it looked to have simmered down a little, halfway through the final quarter Cox got Riewoldt in what the commentators called a “coathanger”.

“That was a delayed free kick for someone who had his head ripped off,” Lyon said. “He went after Jack too.”

“One from the memory bank late in that third quarter Gaz?” Brown added.

“I think we’re seeing another side of big Mason, which is not such a bad thing, making himself known,” Lyon added.

At the end of the game, Cox laughed off the clash.

“I think we’re all excited to be back playing footy to be honest,” Cox told Fox Footy.

“I always love a bit of chirp here and there and after a few there was a bit going back and forth and a few guys in the forward line decided to come back and give me a bit of lip. It’s always in good fun and it’s just enjoyable.

“It’s a pre-season game, but it’s good fun. At the end of the day you shake hands and I think this is what footy is about. I think it’s okay. On the field you can talk trash, but once it’s done everyone is friends.”

But now we’ll have to wait until round 17 to see if this is resolved. July 10 – put it in your diaries.