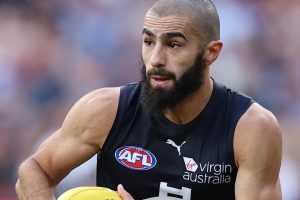 Memo Luke Sayers: here’s an early look at the damning stats that will be part of the comprehensive Carlton review.

The Blues president has announced a probe of every section of the club’s operation, which should include issues all over the field this season, and in recruiting.

Champion Data analyst Daniel Hoyne and North Melbourne champion David King put the Blues under the microscope on Pure Footy, the weekly show exclusive to heraldsun.com.au and, in Hoyne’s words, “it doesn’t make for pretty reading”.

WATCH PURE FOOTY IN THE VIDEO PLAYER ABOVE

Hoyne said the Blues had challenges in all three phases of the game — in the contest, defence and offence.

One glaring issue is giving up big scores — they have a 0-7 record against top eight teams and have conceded an average of 100 points in those matches — particularly from turnovers, with some surprising offenders.

“Only Adelaide have conceded more points from midfield turnovers this year — they (the Blues) are conceding 40 points a game from the main score source from the main area of the ground. Defensively that’s just not going to hold up,” Hoyne said.

“If you look at the culprits (Adam) Saad has turned the footy over 39 times in the midfield area, Patty Cripps 38 times, Lachie Fogarty 37 times and Jacob Weitering 35 times. He’s had 84 disposals so far this year in that area of the ground for 35 turnovers. That’s a surprising strike rate for such a good footballer.”

King said the poor performances exposed issues with Carlton’s recruiting — “they have spent far too much money on flankers who don’t kick goals” and the game plan.

See more on Carlton’s problems in this week’s episode plus the chink in Richmond’s armour, the big positive from Collingwood’s win against Adelaide, the rise of Zach Merrett and more.