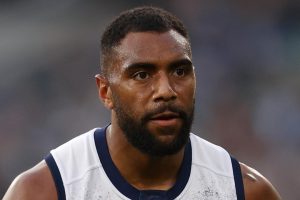 On the eve of his 50th senior appearance, Ratugolea said he was pleased to have recommitted to Geelong.

“I can’t wait to see what this group does going forward, and I want to be a part of it so it’s very exciting times,” Ratugolea said.

“I got drafted with a few of the blokes who have signed on; Jack Henry, Mark O’Connor and Brandan Parfitt. I love the group, I can’t wait to develop my footy and grow with this club.”

With Jeremy Cameron, Gary Rohan and Tom Hawkins all on the books, Geelong’s embarrassment of riches up front has forced Ratugolea to spend time not just in the forward line but in the ruck this season.

However, the 22-year-old said he is looking at the shift as a learning opportunity.

“It’s actually really good, it’s adding another string to my bow,” he said.

“I’m just competing as much as I can, whether that’s in the ruck or up forward, it’s great. It’s great for my development as well. I’m still learning the game.”

Geelong’s general manager of football Simon Lloyd added: “Esava continues to develop his football craft in a number of roles both in the ruck and up forward.”

“He’s exciting to watch and has great potential to build on his first 49 games of AFL experience.

“We see Esava as a key part of the club’s next generation, and we are pleased to have secured his services.”

Recruited with pick No. 43 of the 2016 national draft, Ratugolea has played his entire AFL career to date with the Cats, who are pushing for their first premiership since 2011.

Third-placed Geelong enters round 19 just two points behind the ladder-leading Demons but plays fewer sides currently in the top eight than the teams that sit in first and second.