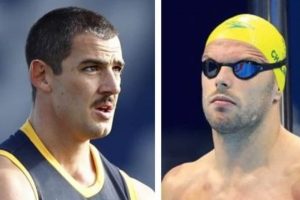 Walker was suspended for six matches and fined $20,000 for making a racist comment directed towards North Adelaide player Robbie Young at a SANFL match in July.

The race to the 2021 Toyota AFL Finals Series is on and every match matters. Watch Live & Ad-Break Free on Kayo. New to Kayo? Try 14-days free >

An Adelaide Crows official overheard the comment and reported the incident to the club who reported it to the AFL.

Last week, Walker broke his silence over the racial slur, apologising for his comment and announcing he will take time away from football to “let people heal” and “educate myself”.

In a video posted to the Adelaide Football Club’s website, Walker appeared in a video alongside Young, who offered to stand next to the Crows forward for the clip.

Walker apologised to Young, his family and the wider Indigenous community.

With Walker stepping away from the Crows at least temporarily, his future in the AFL is very much up in the air.

Chalmers, who won a silver medal in the 100m freestyle at the Tokyo Olympics last month, has resolved to take a firm stance against racism following the Walker incident and Carlton star Eddie Betts’ emotional plea to all Australians to stop racism.

The 2016 Olympic champion in the 100m freestyle believes Walker should not be given the opportunity to play another game in the AFL.

“I think he’ll struggle to get back into the AFL system really, or I would like to think so, because I just don’t think it’s appropriate,” Chalmers told the ABC.

“If you’re educated for 14 years — I get everyone makes mistakes but it’s a seriously big mistake to make.”

While Chalmers turns his attention to the next Olympic cycle, he has also used his time in quarantine to make the most of his platform to discuss important issues.

During his isolation, the 23-year-old posted a video to social media to launch the “Enough is Enough” anti-racism campaign, which encourages Australians to educate themselves about racism.

We commit to no longer standing by and leaving the load to those who are impacted by racism.

“A lot of Aboriginal and Torres Strait Islander people try to stand up and educate, but it should be us,” Chalmers said.

“Me as a white Australian, I should be the one standing up and trying my best to educate myself but also people around me and call out racism.

“I know it’s a journey for everyone and I just really hope that we can be a united Australia and this starts to be a thing of the past.”

Chalmers is clearly passionate about starting a conversation about racism and he believes Australia has a lot of work to do to address the issue.

“I think we’re joking ourselves if we think Australia is a non-racist country, I think we have many problems with it and it seems to be just kind of embedded into our culture,” he told the Herald Sun.

“I definitely want to be (part of) a culture and a country that’s united and proud of the rich history with Indigenous culture,” he said.

“I hope as many people who feel passionate about it, stand up and be brave and join forces and hopefully we can put a stop to racism in Australia because it’s definitely needed and it’s not nice.

“It’s not nice hurting people, it’s not nice seeing people hurt, so the quicker we can get on top of it, the better.”